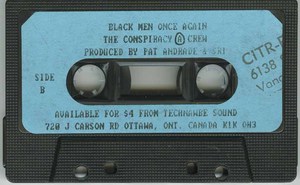 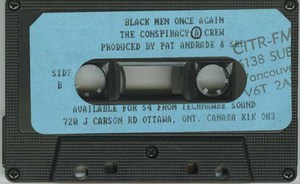 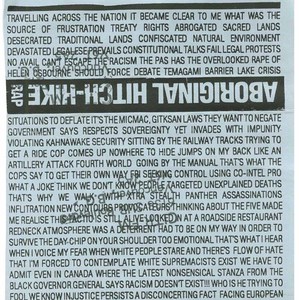 Tha Pas: town where Helen Osbourne, a Native woman was raped and killed by a white man and even though many people in the town knew what had happened it took years for anyone to be arrested.

Temagami, Barrier Lake: two reservations where the environment is being threatened and destroyed by logging.

Micmac: hunting rights are currently being ignored by the Nova Scotia government.

Kahnawake: reserve was invaded by an RCMP military force in 1988 on the pretext searching for illegal cigarettes.

Fourth World: book by George Manuel linking the situation of indigenous people around the world/

Co-intel pro: FBI operation whose goals include the assassination or disruption of groups they deem threatening to their concept of democracy, ie Black Panthers, the American Indian Movement.

Okanagan prophesy: one day people of colour will unite on the N. American continent to fight repression, prophesy by an Okanagan elder who also predicted the telephones and telegraphs.

Produced and mixed by Sri, Pat Andrade and Jon

Rapping done by Down by Law from Halifax, featuring Joe Run & J. Rock.

Cover concept by Whiteboy
illustration by S. Nash
Typeset by Conspiracy B Crew

free to be downloaded per the band's request.