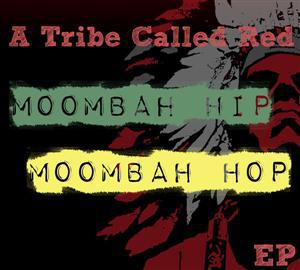 When Ian Campeau and Bear Witness, two Ottawa-based aboriginal DJs, threw a party in 2008 to showcase other artists in their circle, they had no idea it would spawn a new sub-genre of music.

“It was the same idea as how other minority groups in the city would have certain nights at a club,” says Campeau, a.k.a. DJ NDN, on what they dubbed “Electric Pow Wow.” The party was open to everybody and, as Campeau puts it, “was off-the-chain busy. We had no choice but to keep doing it.”

At first, Bear and Campeau would play remixes and mashups — mixing two or more songs together during a single track — trying to make club music that would appeal to the aboriginal community. But that all changed when Dan General, a.k.a. DJ Shub, a two-time DMC Canada battle DJ champion, joined the group that is now called A Tribe Called Red.

As Bear recalls, the three were rehearsing for a festival when Shub first played a “grass dance” song — a piece of music meant to accompany an aboriginal dance that invokes grass blowing in the wind. “Shub gave me the BPM [beats per minute] of the grass dance song and asked if I had anything that would match it,” Bear says. “The first track I pulled was a dubstep called The General.” It was a live mashup that turned into the first track officially produced by ATCR, but more importantly, it was also the birth of what is now being dubbed “powwow-step.”

Called Pow Wow Step, that first ATCR song combines high-pitched aboriginal cries with a reggae-style beat for a fresh, highly danceable sound. Even though it’s not the only time aboriginal cries have been sampled — Kanye West, for example, used them in his ubiquitous 2010 song, Power — ATCR did something different by bringing them into the foreground. And in a perfect example of re-appropriation, ATCR samples West’s Power in their own track, Indigenous Power, but take away any traces of the rapper.

While the group isn’t against anyone rapping over their music, ATCR’s end goal is to create a sort of urban powwow for the growing number of aboriginals moving away from traditional communities and into the cities. As such, live events take precedence over CD releases.

Adds General: “And everybody remembers the visuals, because you’re seeing things, you’re hearing things, and it’s all new.”

The group’s in-show visuals — which can best be described as a mashup of aboriginal stereotypes, from William Shatner in a feather headdress to the ’80s cartoon staple Brave Star — were added by Bear last year, and double as online music videos.

“It’s something my work has always explored, taking one-dimensional, racist, stereotypical images from the media and flipping them, as well as digging deeper into these images and the connections I had to them,” says Bear, adding he has a huge collection of obscure DVDs and VHS tapes to draw from.

The whole effect is an urban aboriginal experience that is not only building buzz on blogs and MTV, but is also focusing attention on a traditional form of music that doesn’t exactly get mainstream radio airplay. In doing so, though, the group had to be careful of what music they could sample without upsetting older aboriginal generations. Campeau, who was a powwow singer when he was younger, knew firsthand what songs would be safe to use.

“We want people to dance, so we use songs that are meant for people to dance to,” he says. “We won’t use sacred songs, such as ‘honour’ or ‘grand entry’ songs, which aren’t even allowed to be recorded. We have way too much respect for the tradition to do that.”

The cautionary approach appears to be working, as illustrated on ATCR’s first official single under the Masalacism Records label, Red Skinned Girl, which samples a similarly named song from the Grammy- and Juno-nominated powwow singing group, Northern Cree.

“Northern Cree were at one of our shows,” Bear says, adding that having the “reigning champs” of powwow singing in the audience definitely added to the pressure. “We’ve never been more nervous than we were knowing that they were going to be at our show. But at the end of the night, they came up to the DJ booth and asked if we could play Red Skinned Girl again.”
-nationalpost