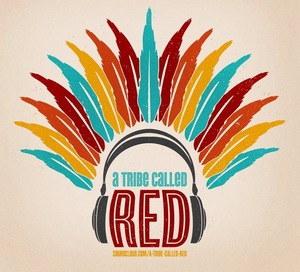 Electronic music seems to be on the cutting edge of musical innovation these days. The flexibility of the medium encourages experimentation which, I’m sure we can all agree, has resulted in some of the most interesting albums of the last few years and even, dare I hyperbolize, of all time. The cream of this new generation of DJs and producers are doing incredible things that, if they aren’t dramatically changing the industry as we know it, they darn well should be. It is a genre that more consistently creates that feeling that comes only when you hear something genuinely new.

And this brings us to A Tribe Called Red. Today ushers in the release of the band’s eponymous first album. And – let me get your attention here – it’s free. Presumably most people have stopped reading by now, and have gone to download the album. Those who remain likely haven’t yet heard of A Tribe Called Red. Let me indulge you.

A Tribe Called Red is an Ottawa-based electronic DJ/Producer outfit. Their sound has been described as PowWowstep, a blend of elements of electro, dubstep and traditional native powwow songs. The style is new, interesting, and downright compelling. The three-man act consists of Bear Witness, DJ NDN and DJ Shub, two time Canadian DMC DJ Competition champion. The talent of these three men is evident. In recent months they have been featured heavily on CBC Radio and other outlets, doing interviews as well as landing a concert spot on All in a Day. They run the bi-weekly Electric Pow Wow, which has become a staple of the Ottawa scene and highlighting local Native talent.

And now a free album. It’s almost overwhelming. And if some folks read reviews like this to determine whether or not they should buy the album, I can answer that this free album is at least worth ten dollars, if not more.

So many of the songs on this album are great examples of what creative people can do with this medium. “Red Skin Girl” (above) especially stands out. When this track starts playing, the volume cannot be loud enough. It’s a remix of a Northern Cree song of the same name. The original is an incredible song in its own right, and I highly recommend listening to both tracks. What ACTR do with the sample is staggering. They work with the original song to produce something new and exciting that enhances the appeal of the original. That’s how good remixes are done. Listen to the way the chorus grooves, perfectly underscoring the beautiful cries of Northern Cree. And the entire song is one huge build toward this tumultuous chorus. I find myself looking forward to the chorus every time I listen to this it, and it’s due to ATCR’s careful attention to song structure in combination with what is one of the catchiest choruses I’ve heard in a while.

The next song shifts the focus to more serious topics. “Woodcarver” concerns the case of Native man who was shot and killed by police in Seattle. The song takes the form of what could be called an electronic music essay, featuring audio from news clips that serve to contextualize and examine the incident. All this is set to a dubstep-inspired synth lick that is, for lack of a better phrase, dang cool. All in all, like other ATRC songs, the song works very well as an arrangement. Each part of the song enhances every other part.
That’s a quality that recurs consistently throughout what is an exceptional album. The album starts with “Electric PowWow Drum,” serves as an excellent introduction to the band’s style. It effectively eases the listener in by starting slowly, then breaking into head-bobbing beat set to traditional chant. Later songs break the mould by including things like Jamaican singing and RnB style vocals. And while the album’s fourth fifth falls into a slightly over-repetitive mode, it remains very compelling throughout.

If this is the how the new music industry operates, I welcome it with open arms. We live in an incredible time and in a creatively exploding city. A Tribe Called Red’s new album is a product of both these things. It is an inspired creation, and it is also informed by our increasingly connected culture. Anyone can download and enjoy this album free of charge. And I hope this sets a precedent for a more open and accessible musical scene, wherein the barriers between audience and musician become increasingly blurred. If this is the future, I like it.

A Tribe Called Red’s album is available for download on their blog. Their Soundcloud is also a great place to go to get a taste and features some tracks that aren’t on the album. Electric Pow Pow, the group’s showcase event, happens on the second Saturday of every month at Babylon.
-Jared Davidson