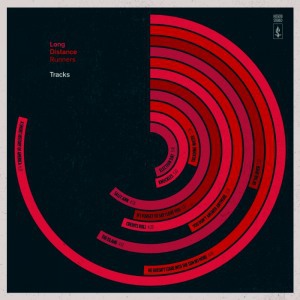 Sometimes an album’s content is as witty as the corresponding album title. In this case, you could not get a better setup- a band called Lost Distance Runners, and an album called Tracks which has a double meaning. The album cover even contributes to the wittiness.

I was pleased to note that this album is a lot more than a clever play on words. In fact, Tracks is a brilliant collection of, well, tracks.

The band brought to mind more often than not a band straight out of the sixties. There is a certain slyness to the music, as if we’ve been best friends with Long Distance Runners for some time now. The music is also incredibly, incredibly smooth. The configuration of guitar, bass, drums or horns always seems to be just right.

Take the opener “Election Day.” The smoothness I mentioned is immediately present in the guitar and bass, as lead singer Chris Picco sings “Did they really believe they could destroy you?” In this song, Picco sounds like Bono fronting Zeus.

“Knuckles” at one point throws a banjo into the mix, and this might not be thrilling to note except for the fact that the band learned a banjo part at the last minute rather than have another musician play. That’s fairly impressive.

There’s an even more prominent “old-time” feel to “Treading Water” which makes very heavy use of horns (and I love me some horns, if that wasn’t already clear). “Sally Ann” meanwhile is a well-crafted pop song, and halfway through morphs into a song that could have been played by Lou Reed.

“If I Forget To Say I Love You” turned out to be one of my favourite tunes on the album even though the title makes it sound cheesy. Instead, it’s a heartfelt song sung playfully. If the character forgets to say he loves his girlfriend, he says, “Then darling don’t hesitate, punch me in the face/And throw me up against the wall.”

“Credits Roll” sounds like a song out of Joel Plaskett’s songbook, and this is a high compliment. There’s also some great power in “The Island.”

“He Doesn’t Stare Into the Sun No More” is a deceivingly sunny song, and the last song, “A Short History of America,” sounds like an extended campfire song, featuring the prominent line “If you don’t know where you come from/Where you s’posed to go?/I know where I come from/’Cause I was born to rock and roll.”

Upon closer listening I found myself enjoying this immensely. When you take a minute to consider what goes into each song, there’s nothing you can complain about.
-Michael Thomas