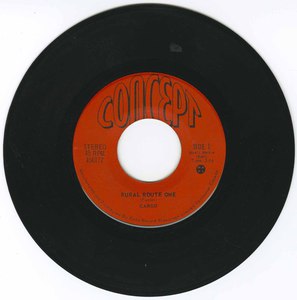 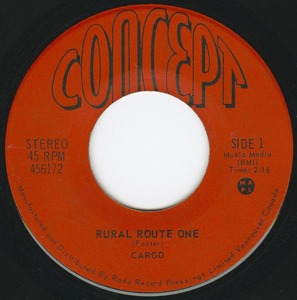 rare Cargo single, on the same label as the sought-out Fear single. The two tracks appear on their second album; given the MAPL insignia, probably released in 1971.

"Both the Cargo and Fear singles were released while I was in Vancouver in 1971 or 1972. As you can see, there were 2 versions of the Concept label. The red labels are from my manufacturing and distributing deal with Rada Records. They had a small pressing plant, located in the eastern suburbs, which was eventually sold to gospel label Praise Records. The brown and beige labels are from my deal with Imperial Records, a California company that owned a pressing plant in Vancouver."
-Merv Buchanan

"The title of the track “Rural Route One”, was adopted at the last minute, because Norm couldn’t think of anything else. It was actually Trend Records’ address (RR1, West Hill, ON)."

hi Merv, any idea how many of the 2 albums were pressed and how many of the trend singles were usually pressed? how about the cargo and fear singles on the red concept label? were these the only 2 singles released on the red label? thanks for your help,
Robert

Back in the late 60s, early 70s, most record labels, Trend included, did an initial run of 200 – 250 copies of everything. Records were packed in boxes of 25 pieces and I think we used to get 10 boxes of everything.

Cargo and Fear were the only releases on the red Concept label. We changed the design completely, for my manufacturing & distribution deal with Imperial Records. The red Concept label and the yellow Mountain City labels were pressed and distributed by Rada Records.

Hopefully more light will be shed on these and other recordings later this month with Merv's new website located here: http://www.trendrecords.ca. Amongst the dozens of interesting listings will be the only known photo of the Sedum Shadows.