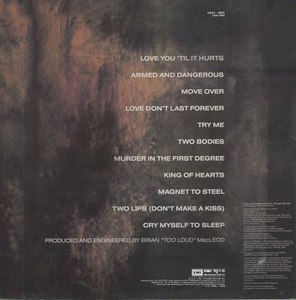 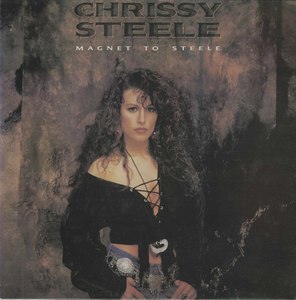 Magnet To Steele is the debut effort from this Canadian native. Songs like "Love You 'Til It Hurts", "Move Over", "Murder In The First Degree" and "Magnet To Steele" really rock hard. Of course there are your typical slower paced numbers in "Love Don't Last Forever" and "Cry Myself To Sleep".

Chrissy Steele's sound is very similar to another female Canadian vocalist, Darby Mills and the Headpins (with a touch of Lee Aaron for good measure), which only makes sense as this was originally slated to be a Headpins album. Magnet To Steele really was the brainchild of Headpins founder Brian MacLeod, who produced, played and wrote the vast majority of songs found here. Sadly this would be his final release, as MacLeod succumbed to cancer at the age 39. Steele is rumored to be working on another album in the future, but in the meantime I give this record two thumbs up!

When vocalist Darby Mills walked away from the Headpins to pursue a solo career, the band was forced to look for another singer. The voice they discovered was that of the beautiful Chrissy Steele, a 24-year-old British Columbia native with a voice that was very similar to that of Mills.

A couple of Steele fronted Headpins tours occurred in 1990, but by the time recording for the new album began guitarist Brian MacLeod was the only remaining member from the classic Headpins line-up. However bad news had arrived for MacLeod, who just received news that he had cancer. The recording for the new album was done in a mobile studio off the Pacific coast, with Steele, drummer Pat Stewart and "Too Loud" MacLeod handling all guitars and bass duties. MacLeod had written the majority of the album with Tim Feehan, with guest writing credits going to Mutt Lange, Jeff Paris and members of Loverboy.

With MacLeod's failing health, it was decided to release the album as a Chrissy Steele solo effort. Videos for the singles "Love You 'Til It Hurts" and "Love Don't Last Forever" were released in late 1991 while Steele put together a touring band to promote the new release. Despite being nominated for two Juno's in 1992, the record label dropped Steele from their roster and the band broke up shortly after.

Sadly, on April 25, 1992, Brian "Too Loud" MacLeod succumbed to cancer at the age of 39. Chrissy Steele has lived in relative obscurity ever since, making small appearances on albums by Tim Feehan and Fury.