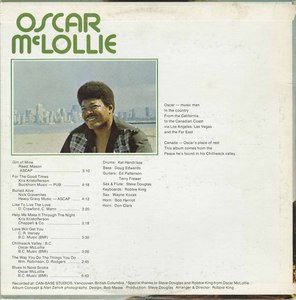 Oscar McLollie was born on September 22, 1924 in Caldwell County, Louisiana. In the late 60s, Oscar Moved to Vancouver, Canada, and settled in the Chilliwack Valley and recorded this album with a whos-who of Vancouver session players:

Many of these players played with bands like 'Papa Bears Medicine show', 'Spring' and 'Brahman'. Doug Edwards and Kat Hendrikse played on hits like "Seasons in the sun" by Terry Jacks and other Vancouver recordings.

The album features a wonderful tribute to Chilliwack, B.C.. While in Vancouver, he also recorded a single on the New Syndrome label entitled "So Pleasing Loving You b/w As Long As You Care at All".

The cover was designed by Bob Masse.

The album was re-issued in 2011 on Vintage Masters Inc. as The Best Of with three additional tracks and is available for purchase on itunes here: http://itunes.apple.com/us/album/the-very-best-of/id490160712