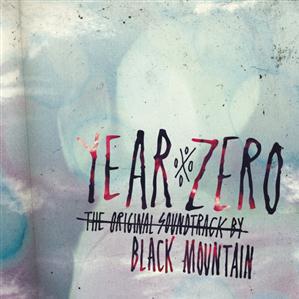 If you were asked to pick a band to record an original soundtrack for a surfing movie, there are probably dozens of other acts who would come to mind well before Canadian heavies Black Mountain. They offer up neither the sunniest nor the most feel-good sound on the indie rock block, but the band’s music adds a cool, druggy haze to the heat-drenched, slow-motion surfing footage of the film’s trailer, so it looks like they’re probably a better fit than your hunch might tell you.

Unfortunately for Black Mountain fans, more than half of the Year Zero soundtrack’s running time is made up of previously released cuts from their old records. The 13-minute jam “Bright Lights” and the pummeling hard rocker “Tyrants” appeared on 2008′s In The Future, “Wilderness Heart” is from 2010′s album of the same name, and “Modern Music” appeared on their 2005 self-titled debut. It’s not a bad assortment of highlights from their previous work, but chances are any fan interested in a side project like this will have them already.

So, what’s that leave us with in the way of new material? Some pretty good stuff, actually. The seven-minute, rip-roaring “Mary Lou” is a new Black Mountain classic, an intense, latter-day headbanger with a few truly sublime fuzz solos. “Phosphorescent Waves”, “In Sequence”, and the spoken-word “Embrace Euphoria” champion the band’s proggier, synth-heavy tendencies, which are atmospheric if not hard-rocking. Record closer “Breathe” is a quick, noisy jam but not really essential.

Year Zero probably would have worked better as a more condensed EP featuring only the new material. As a full-length, the whole soundtrack probably isn’t worth the plunge for owners of the band’s last two releases, but luckily, tracks are being offered up for download individually. Grab those while they’re hot.
-Austin Trunick