Dunn, Willie - Son of the Sun 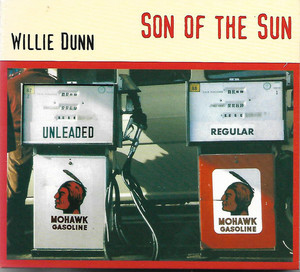 In June 2005, Willie Dunn was inducted into the "Walk of Honour" in the city of Edmonton, AB, for his lifetime efforts in film-making. Other inductees included Gordon Tootoosis of "Dances with Wolves" and "Legends of the fall" fame: and August Shellenburg, in "Black Robe" and "Free Willie."

During the same year, Willie received the coveted "Lifetime Achievement" for his contribution to Aboriginal Music, at the Aboriginal Music Awards at Harcourfront in Toronto.

In 2005, was also the European release of his latest CD entitled "Son of the Sun." It is a collection of contemporary music depicting the political and social temperament of the times. Other recent releases include "Walking Eagle" and "Metallic", the latter rising to number three in the Internet Hot Parade. Other recordings and CDs include "The Vanity of Human Wishes," "The Pacific," and "Willie Dunn".

In that year, the National Chief, Phil Fontaine, invited him to two of the Assembly of First Nations functions. One was in the City of Calgary for Residential School Settlements and the All Chiefs General Assembly in PEI.

In 2004, he won a Canada Council grant to attend the "Womax Showcase" in Berlin, Germany. While there, at the urging if his record company, he was invited to perform for "The Nuclear Free Future Awards" in the same city. Attending and receiving the awards was the Russian Colonel responsible for updating the world on the negligent state of nuclear submarine storage in the Baltic.

Willie performed several times on the "Buffalo Tracks" in APTN as well as the Aboriginal Voices Music Festival in Toronto.

He represented Canada on the fiftieth anniversary of the United Nations through his contribution to a compilation CD, which included other Canadian artists such as Moe Koffman, Lenny Breau, Glen Gould, Ian and Sylvia and Leonard Cohen.

Films of note are: "The Ballad of Crowfoot", "The Other side of the Ledger", and "The Voice of the Land is in our Languages."