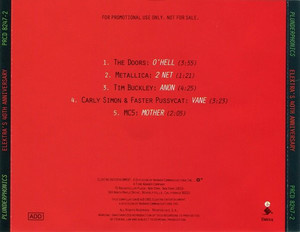 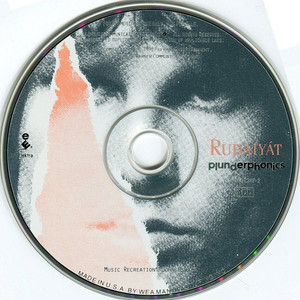 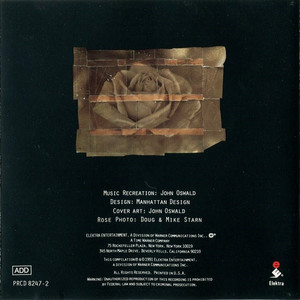 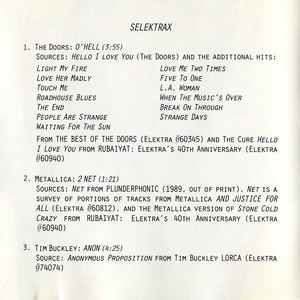 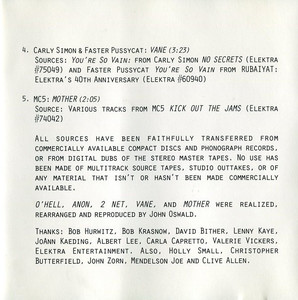 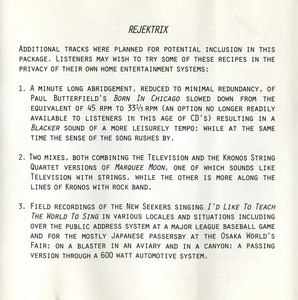 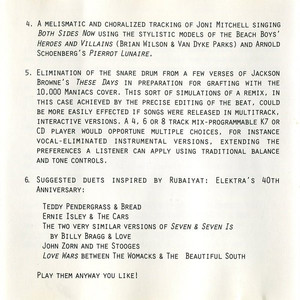 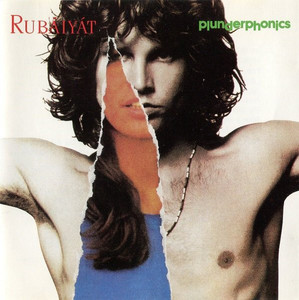 The following is an excerpt from an interview with plunderphonics reproducer John Oswald and mLAB historian Norman Igma during which Oswald recounts the backstory for Elektrax:

Igma— These five tracks constitute the entirety of an EP commissioned by Elektra Entertainment in 1990, which was never released.

Oswald— A few thousand were pressed for radio. I think that except for a fix-up in 'o’hell', and remastering 'mother', which was bass-shy in the original, that this is more or less an exact replica of the 'elektrax' CD-EP.

I— Which Elektra gave the title Rubáiyát. Were there any other things they changed or gave you a hard time about?

O— Other than vetoing Carly Simon’s breast for the cover, no. That was a bit strange because they had already released the same photo on the front of her album.

I— I’ve noticed that many of the cuts in [the CD box set] '69plunderphonics96' have different track start points than they did in the original releases.

O— Which is a result of mastering in house now, which we weren’t doing in the late eighties. This resulted in a few errors... more
credits
released September 1, 1990

To prove they were truly hip, Elektra commissioned Oswald to plunder artists on their label for a special anniversary EP they planned to release as part of the Rubáiyát package (Oswald prefers the title "Elektrax"). Unfortunately Elektra failed to obtain permission from the Morrison estate for use of Doors material and also failed to inform Metallica of their involvement (although, reportedly, the band thought it was "cool"). The result: it was distributed only to DJs and radio stations and is now almost impossible to find.
One more thing. The artwork here is not John's original but an Elektra facsimile that sort of misses the "point".

All tracks rearranged and reproduced by John Oswald.

All sources, unless otherwise indicated, are available on the Rubáiyát.

All sources have been faithfully transferred from commercially available compact discs and phonograph records, or from digital dubs of the stereo master tapes. No use has been made of multitrack source tapes, studio outtakes, or of any material that isn' t or hasn't been commercially available.
Applicable rights of the electroquoted tracks are retained.
Copies don't sound as good.

2. Metallica - 2Net
sources: "Net" from the CD Plunderphonic (1989, out of print; remaining copies destroyed by recording industry piracy police).
"Net" is a survey of portions of all tracks from the Metallica LP And Justice For All (Elektra CD 60812, 1989)
"Stone Cold Crazy" (author?) the Queen & Metallica versions.

•rejektrix•
Some additional tracks were partially prepared. Listeners may wish try some of these recipes in the privacy of their own home entertainment systems:

1. A minute-long abridgement, reduced to minimal redundancy, of Paul Butterfield's "Born In Chicago" slowed down from the equivalent of 45 rpm to 33 1/3 rpm (an option no longer readily abailable to listeners in this age of CDs) resulting in a 'bl acker' sound at a more leisurely tempo; while at the same time a sense of the song rushes by.

2. Two mixes, both combining the Television and Kronos String Quartet versions of "Marquee Moon", one of which sounds like Television with strings, while the other is more along the lines of Kronos with rock band.

3. Field recording of the New Seekers singing "I'd Like to...[etc.]" in various locales and situations including: over the public address system at a major league baseball game and for the mostly Japanese passersby at the Osaka World's Fair; on a blaster in an aviary and in a canyon; a passing version through a 600 watt automotive system.

4. A melismatic and choralized tracking of Joni Mitchell singing "Both Sides Now" using the stylistic models of the Beach Boys' "Heroes and Villains" and Arnold Schoenberg's "Pierrot Lunaire".

5. Elimination of the snare drum from a few verses of Jackson Brown's "These Days" in preparation for grafting with the 10,000 Maniacs cover. This sort of simulation of a remix, in this case achieved by the precise editing of the beat, could be more easily effected if songs were released in multitrack, interactive versions. A 4, 6 or 8 track mix-programmable K7 or CD player would opportune multiple choices, for instance, vocal-eliminated instrumental versions, extending the preferences a listen er can apply using traditional balance and tone controls.

6. Suggested duets from the Rubáiyát package: Teddy Pendergrass & Bread Ernie Isley & the Cars the two very similar versions of "7 & 7 is" by Billy Bragg & Love John Zorn & the Stooges "Love Wars" between the Womacks & the Beautiful South.