Islands - A Sleep & A Forgetting 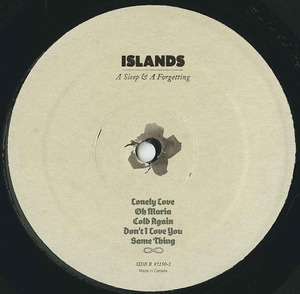 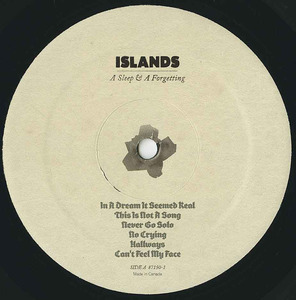 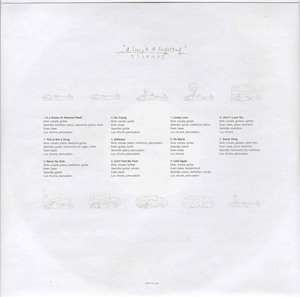 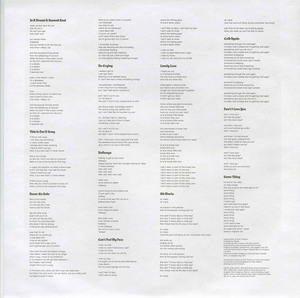 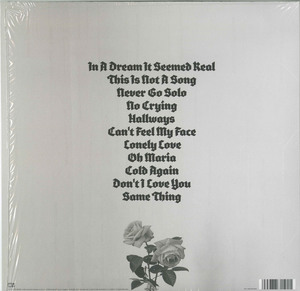 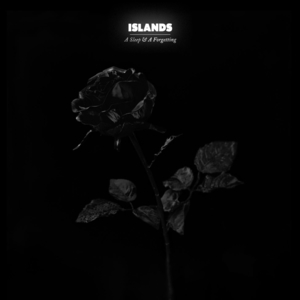 Who is Nick Thorburn? Up to this point, it's been hard to tell. As figurehead for the six-years-strong Islands, he's been an artistic vagrant, switching from strummy, beached Graceland-isms, to avant-rap experiments, to overblown indie pomp, to squishy, Auto-Tuned synth-pop-- sometimes, within the same record. Side projects like Human Highway and Mister Heavenly have gone great lengths to mine his appreciation for the garage pop of the 1950s and 60s, but have revealed relatively little; last year's pay-what-you-want solo album under his Nick Diamonds alias, I Am an Attic, was a cleaning-house collection that didn't provide much help either. Even the album that was responsible for Thorburn's rise to mid-level recognition, the Unicorns' 2003 effort Who Will Cut Our Hair When We're Gone?, provides few clues (no pun intended)-- both because he hasn't produced that brand of ecstatically demented indie rock since, and because the band imploded a year after the album's release.

Thorburn's relative artistic facelessness is made more complicated by the fact that Islands is, essentially, a solo project itself; since the 2006 debut, Return to the Sea, no Islands record has featured the same personnel, with former Unicorns member Jaime Thompson leaving the band previous to 2008's Arm's Way and returning for the following year's pop-fixated Vapours. For Islands' latest, A Sleep & a Forgetting, the lineup's changed again, with Thompson departing shortly after the last record was released. Claiming that this record is different from its predecessor is something of a folly in itself-- every Islands record is a change-up from the one previous, almost to a fault-- but regardless, it feels like a curtain's been pulled back for the first time. It's the most cohesive-- and, possibly, the out-and-out strongest-- Islands record yet, one that retains a singular focus while zooming in on an artist who's preferred to remain at a distance, obscured by so many stylistic gambits, for so long.

Ironically, the renewed passion existent in A Sleep & a Forgetting can be credited to a loss of passion in Thorburn's personal life. In a recent interview with Vulture, he revealed that the album's creation was spurred on by a bad breakup and subsequent self-exile to "a friend of a friend's" place in Los Angeles, where he largely wrote the record's songs on piano. Thorburn's described A Sleep & a Forgetting as "confessional," and it indeed finds him at his most lyrically direct and naked, whether it be the open-ended questions asked to no one on the album's beautifully burnt-out penultimate track, "Don't I Love You", or the opening couplet on "Can't Feel My Face", which pretty much spells it out for you: "I miss my wife/ I miss my best friend."

Confessional intimacy needs an intimate setting to match, so the behind-the-boards inclusion of Rob Schnapf, who co-produced a large amount of Elliott Smith's discography, was an inspired choice. Schnapf keeps things as unfussy as possible, which is fitting since A Sleep & a Forgetting is a particularly unfussy album of capital-S "songs." As with Human Highway and Mister Heavenly, Thorburn's still drawing from garage-pop and singer/songwriter sounds of yester-yesteryear, but save for a few minor flourishes here and there-- the chilled-veins AOR pop of "This Is Not a Song", a "96 Tears"-worthy lick of dirty organ that writhes through "Can't Feel My Face"-- there's nothing that distracts from the songwriting, which is unarguably as strong as it's been since the Nick Diamonds' days as a Unicorn.

A Sleep & a Forgetting is a small album, both by design and in its impact; there are no grand statements made, musical or otherwise, and since this is, really, 37 minutes of no-frills, room-temperature indie pop proper, it's incredibly easy to let this record get lost in the breeze. This isn't a bad thing, though-- in fact, it's something of a triumph for Thorburn, to match his most emotionally devastating material yet with music that's so close-sounding and unassumingly, unabashedly pretty. There's humanity in these songs, a quality that was muddled in the noise of Arm's Way and Return to the Sea, and sidelined during Human Highway and Mister Heavenly's genre excursions (however pleasurable they might have been). When Jaime Thompson left Islands for the first time, Thorburn memorably and amicably proclaimed, "Islands are forever." Maybe a repurposed album title from his old band would work better this time around: Islands are people too.
-Larry Fitzmaurice, Pitchfork

Acclaimed modernist pop band Islands will release their new album A Sleep & A Forgetting this February 14th via Anti-Records. While the record continues the band’s penchant for crafting adventuresome and infectious state of the art pop music, this time band leader Nick Thorburn has infused the songs with a personal introspection that gives the record a new and powerful emotional resonance.

“This album is far more personal than any I’ve made before,” Thorburn explains. “I left New York after the end of a relationship and came to Los Angeles. There was a piano where I was staying and that’s where I wrote these songs. This record deals with loss, with memory and forgetting and with dreaming. I started writing it on Valentine’s Day and its coming out on Valentine’s Day.”

A Sleep & A Forgetting is the anticipated follow up to Islands critically heralded record Vapours, which Black Book described as "infectious and weird....masterful” and Popmatters proclaimed “a damn fine record.” The new album was produced by Thorburn and fellow Islands member Evan Gordon in less than two weeks, the 11 songs recorded live with hardly a single overdub. It’s a stripped down process and beautifully understated sound which only reinforces the confessional content of the lyrics

The new album offers all the shimmering sonic textures and irresistible melodies that have come to define Islands enduring appeal, but there is a deeply personal cathartic undercurrent to the songs. “The sound is really my interpretation of soul music,” Thorburn offers. “I mean, I’m a white kid from Canada so it’s gonna be very warped. But that’s where my head was at, that particular way of dealing with themes of pain and heartbreak.”

While admittedly listening to the classic soul of Smokey Robinson and The Temptations, Thorburn was also influenced by the introspective folk of artists such as Sibylle Baier, Maddy Prior and June Tabor. As a result the sound is less an approximation of classic Northern soul and more akin to the symphonic and cathartic pop of soul baring artists like Harry Nilsson and Roy Orbison. As the late Link Wray once said, “Soul music is pain.”

And it comes together to striking effect on songs like the heartfelt ballad “Same Thing” with its echoing modernist beat, lilting refrain and confessional lyrics such as: “I can't wait to see, what becomes of me, the ease with which I sleep, tends to frighten me.” As Thorburn explains, “I wrote that song when I was just in the depths. It was just this surreal and intensely cathartic experience.” On the darkly dramatic “Oh Maria” Thorburn sings of Buddy Holly’s anguished young widow and her reoccurring crash site dreams. “She would have these dreams about being in the field where his plane went down,” Thorburn says. “She would be trying desperately to get past all the bystanders to see him one last time. It’s such an evocative story it just stuck with me. And it’s absolutely consistent with the album’s themes of heartbreak, death and dreaming. “

Far from being self pitying, A Sleep & A Forgetting powerfully transforms personal unrest into affecting and soulful pop music. “It’s kind of frightening,” Thorburn reflects.

“I’ve always hidden behind devices and humor but this album is just so much starker and open.” And it’s a risk that absolutely pays off. The new record features some of the most startling and memorable songs from a supremely talented band which has continued to both evolve or surprise.