Appleyard, Peter and the Jazz Giants - The Lost 1974 Sessions 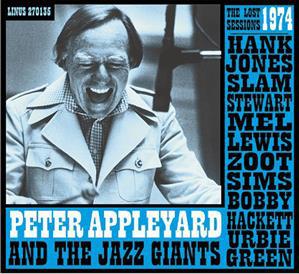 The Lost 1974 Sessions is a reflection of a moment in time. It is an album inspired by the artists that created it and an album born from the serendipitous circumstances that brought together an extraordinary group of jazz musicians.

Complete with session outtakes, the album takes the listener into the studio, almost experiencing the recording as it happens. Each musician’s brilliance is showcased on specific tracks chosen to highlight their individual talents. The album achieves what it set out to do; capture a moment in time, exquisitely conveying the mood and feel of that night.

As a member of Benny Goodman’s jazz sextet, Appleyard had the opportunity to play with members of Goodman’s band at Ontario Place Forum in 1974. Assembling Slam Stewart on bass, Hank Jones on Piano, Zoot Sims on Tenor, Urbie Green on trombone, Bobby Hackett on cornet and Mel Lewis on drums, under the name “The Jazz Giants,” Appleyard had the foresight to record this group of incredible Jazz musicians after that night’s show. The result is the phenomenal The Lost 1974 Sessions.

Peter Appleyard and the Jazz Giants' The Lost 1974 Sessions features the British/Canadian vibraphonist backed by members of Benny Goodman's sextet at the time. Having played a show at the Ontario Place Forum with Goodman, Appleyard booked the ensemble for a recording session figuring, quite rightly, that the chance might not come around again. Featured here is truly an all-star cast of swingers including pianist Hank Jones, bassist Slam Stewart, tenor saxophonist Zoot Sims, trombonist Urbie Green, cornetist Bobby Hackett, and drummer Mel Lewis. Primarily sticking to standards, as well as a superb medley of Duke Ellington compositions, the Giants delivered an ad hoc, inspired and swinging performance that was somehow lost to time for over 30 years. Also included here are in-studio dialogue clips between the musicians and the engineer, which adds to the overall sense of being right there in the studio with the once-in-a-lifetime ensemble.