Skarecrow - Surfing in the Maritimes 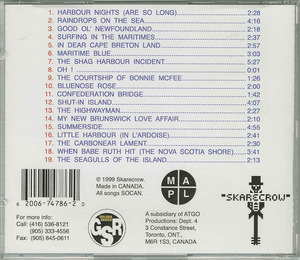 CD-Skarecrow - Surfing in the Maritimes JEWEL BACK 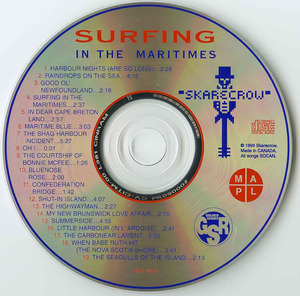 CD-Skarecrow - Surfing in the Maritimes CD 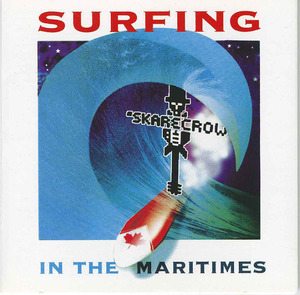 Although they are not based in Nova Scotia, two of their members are from Cape Breton so I've decided to include them on the site. The following is written by their manager Mary Brown who is originally from Bridgewater.

Skarecrow formed in October 1971 with all personnel still intact:
Wolf René - lead guitar (from Sudbury, wrote "Good Ol' Newfoundland")
Ace Briand - drums (from L'Ardoise, Cape Breton) George Cook Jr. - rhythm guitar (from New Waterford, N.S.- voice like Orbisons)
Krys Val Lewicki - bass (born in England, Toronto now home. Does the arrangements). They have criss-crossed Canada innumerable times, blending humour into their stage act and featuring their original material geared to display their marvelous 4-part harmony. All four men write, and sing lead on various songs, with the others doing the backup. Skarecrow has performed with Charlie Pride, Harry Hibbs and backed up the legendary Jimmie Rodgers for an album he was recording in western Canada.

They have appeared on tv several times, had a song "(We Don't Need) Rene Levesque" confiscated by the R.C.M.P., and are listed in "Profiles Of Canada's Pop Music Pioneers" (Canadian Music Fast Facts). Skarecrow was presented with the Ontario Country Music Association's Lifetime Achievement Award and Krys was named Songwriter of the year in 1996. They have received congratulations from both provincial and federal governments for their longevity in the music business.

Footnote:
It's with a sad and empty feeling that I have to announce George Cook Jr. of Skarecrow passed away Monday August 26/2002. He was only 55 and had developed further diabetic complications after having his right arm amputated a few weeks ago. George was subjected to 10 amputations in the last five years, all intended to "be the one that stopped the infection". It never was.