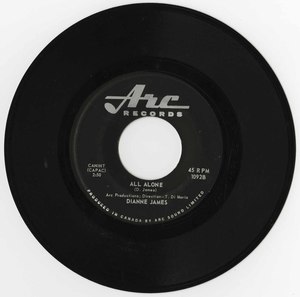 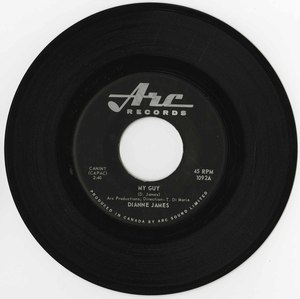 My Guy b/w All Alone

Dianne James was from Edmonton, and was managed by Don Eckess of Canada Wide Attractions. The A side, 'My Guy', was recorded at Arc records in Toronto by a studio band and produced by Tony DiMaria. I played drums for Barry Ennis and the Keymen, from Saskatoon, we were her back-up band that Summer (1965), and we recorded the B side, 'All Alone', at Hollyburn film studios in West Vancouver (they did the Littlest Hobo series).

We were about to leave on a Maritime tour, and we detoured to Vancouver to try this filmstock/recording experiment. It would have worked well, but muti-track recording was about to be invented and the process became obsolete before it was ever used again.

We recorded the song on the audio soundtracks of 35mm motion picture film, we had three recording heads, and 12 playback heads, all running in absolute sync, giving us the option of as many tracks and overdubs as we could ever want. The song was produced by Maurice Marshall, formerly of The Rebels and the Champs, and was engineered by Dr. Howard Tremaine, formerly with Walt Disney Studios and author of the Audio Cyclopedia. It was an experiment to see if this would be a viable option for bands to use, but we only recorded there the one time.

Also, on a more personal note, when we were coming back from our Maritime tour, Don took us to Arc studios in Toronto to try to get us a record deal. Arc happened to have a song with no band, so we recorded it, but the band broke up before the record was ever released. They gave us the name The Golden Earrings, and we recorded two songs .... "In My Situation b/w Nothin' Much" (a Moe Marshall original). Since we weren't around to support the record, Arc used another band called the Untouchables from New Glasgow, NS to pose as the Golden Earrings but they soon got tired of the charade and changed their names to the Stitch In Tyme. True story.

It's funny, I don't think I even made $250.00 for Dianne James' whole Summer Maritime tour, and now the 45 is selling for that much. I don't even own any of the 45's; my copies of all the records I performed on were stolen from my car in New York City in 1967, and I haven't thought about any of this for almost 50 years.
-John Lyons