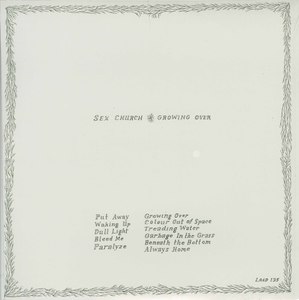 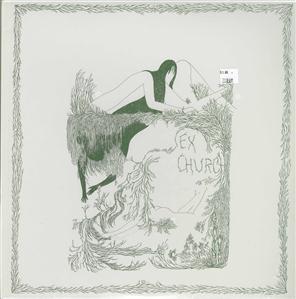 The shaky, ringing chords of Sex Church suggest that there’s at least one dark alley of post-punk that’s got some dustbins worth rooting through. While there’s been plenty of bands that walk the line between art punk and primal rock, duly paying tribute to The Birthday Party and Swell Maps, Growing Over recalls the stark songs that came after those bands fell in the grave, particularly the staggering rock ‘n’ roll that Rowland S. Howard and Nikki Sudden put out. Those guys never had the drive of Nick Cave, but this batch of songs shows a similar talent for making confrontational noise with unexpected streaks of the romantic variety. A weak heart is beating.

The Vancouver band isn’t alone — Slug Guts and TV Ghost have been working this hospital shift, as well. Growing Over is the most satisfying record of the lot, so far. It’s not afraid to be pretty, even if the jangle comes along with a nasal voice and bears the title “Garbage in the Grass.” Some of the songs run long. “Parlayze” cycles through a dreamy sequence of arpeggios without ever building or releasing the initial tension. The casual night owl might check the watch. But what make Sex Church’s sound stand out — and in some ways it’s what makes it succeed — is this raggedness. It’s the difference between the two gigs captured in the movie Wings of Desire; if The Bad Seeds are the climax of a Saturday night, Crime and City Solution are for the insomniac faces clubbing a Tuesday AM to death. Both songs are four minutes long, but one actually sounds a lot more like eternity.

This record sets up traditional song expectations, and then drifts away. Not in a psychedelic fashion, more like a narcotic loss of focus. It makes Growing Over haunted far beyond the givens of tanker-sized reverb and muddy drums. That’s not to say Sex Church doesn’t have its penetrating moments — the kraut beat of “Beneath the Bottom” rages hard. And the chimes that open this record are a warning that big sounds will follow. There are real emotions behind these tracks. But they’re bottled up and can’t quite be articulated through the bluster, as is often the case with real emotions. Growing Over isn’t obviously experimental, but it is risky. The noise has a slow decay.
-Ben Donnelly