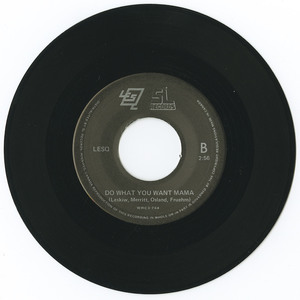 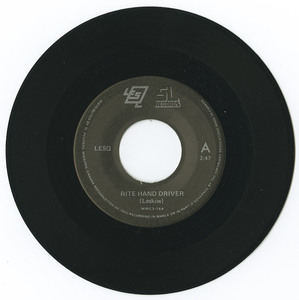 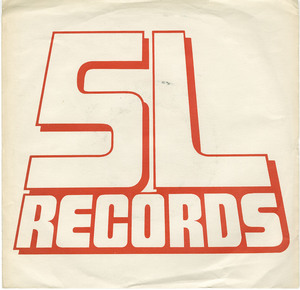 45-LesQ-Do What You Want Mana BACK 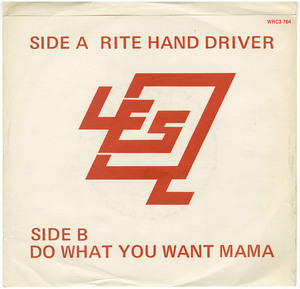 Greg Leskiw began playing guitar at the age of 12. During "kitchen jam sessions" his father taught him the popular songs of the 30's and 40's. His father was an excellent guitar player who performed with small combos that toured in Western Manitoba in the 30's and 40's.

Throughout his school years Greg continued to develop his chops and went on to play with Winnipeg rock bands The Shags, Logan Avenue, and Wild Rice. In 1969 Wild Rice broke up and - perhaps more significantly - in 1970 Randy Bachman left The Guess Who. Burton Cummings gave Leskiw a call and a new exciting chapter in Leskiw's career began.

The Guess Who toured the States and Canada extensively, performing for the Royal Family and at the White House for the president. The band also performed overseas in England, France, Belgium, Germany, and Italy.

Leskiw received gold albums and Juno awards for Share the Land, So Long Bannatyne, and Rockin', and a platinum album for Best of The Guess Who (Volume 1). It was during this period that Leskiw began what was to become a very successful songwriting career, penning songs such as Coming Down Off the Money Bag, One Divided, and Grey Day.

Mood jga jga's successful career has spanned more than two decades on and off. In 1997 the group released Boys Will Be Boys and performed at the Winnipeg Folk Festival, the Winnipeg Jazz Festival and on Gabereau Live! with Vicki Gabereau.

Throughout the 70's, Greg continued to perform with Mood jga jga, Crowcuss, and the Les Q Band which was renamed Kilowatt when signed to Delacorte Records.

In the summer of 1997, Greg began preparations for his latest music group, SwingSoniq, an exciting acoustic trio dedicated to the feel and style of the 30's and 40's. As well as performing songs of that era (Moonglow, After You've Gone and Beyond the Sea, to name a few), SwingSoniq has developed innovative arrangements of their original compositions.

In 1976, former Guess Who members Bill Wallace and Greg Leskiw picked themselves up from the ashes of their own group, Mood Jga Jga, along with keyboardist Hermann Fruhm and assemble Crowcuss with Marc LaFrance and Larry Pink of Musical Odyssey.

Stony Plain signed the band to a record deal in short time and in 1977 released their self-titled debut.

But, by 1978 Leskiw had moved on and the band was getting tired of playing without a guitarist, so Fruhm asked Bob Deutscher (Witness) to join. In early 1979 the band had a Number 1 hit in, of all places, Guatamala with the Larry Pink song "Running Start". This led to an appearance on Canadian television's The Alan Hamel Show (CTV) and others shows on the CBC. Crowcuss also achieved front-cover status on the September 1979 issue of Music Express.

In the summer of 1979, the band started recording the follow-up to their debut called 'Starting To Show'. The record was produced by Greg Riker from Indianapolis in 8 days of recording and three mixing at Century 21 Studios in Winnipeg.

The album was critically panned despite Stony Plain president Holger Peterson's attemot to have the album released in Japan on Trio Records as well as in the USA as a compilation of songs from both albums distributed by First American Records.

Still, the album never caught on at radio and management problems led to a break-up. The group put on a good face, relocating to Vancouver, minus Wallace, but soon rumours of the band's demise couldn't be denied any longer and the members went their separate ways.

Marc LaFrance became a session singer in the Vancouver studio secne and even recorded a solo album, 'Out Of Nowhere', which was produced by Paul Dean. He also created the children's TV show 'Babblebrook' in Western Canada; Larry Pink has gone on to fame with country-rock act One Horse Blue; Fruhm invented a better screwdriver and recently recorded a second Mood Jga Jga album with Greg Leskiw; Bob Deutscher went on to a dozen or so other music acts and plays in CheckOne2. He is currently battling a life-threatening bout with a disease called Amyloidosis.