Gerow, Pat and His Western Gang with Clover Lane - If You Come Home To-night // Ellie Mae 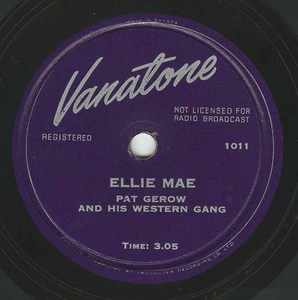 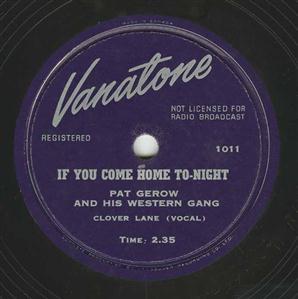 early C&W from the mountainous B.C. interior, pressed on the scarce Vanatone label, likely the late 40's or very early 50's. These folks reportedly had their own record press which would get very hot and, nearly burned down the building they were in. They finally had to get rid of the press and folded the label.

I’ll bet the National Archvies doesn’t have a copy of either this or the Bud Henderson Vanatone disc. ‘Scarce’ is putting it mildly!

Born in Victoria, B.C. on October 1, 1921, Pat grew up in Revelstoke, B.C. along with his 2 sisters Betty and June. Pat chose a musical career and was a master of the steel guitar and turned pro in 1938. Crisscrossing the province playing town halls and clubs, he could run anything from a circus to an orchestra. Involved in local radio, nightclun and stage shows, he accompanied local and international stars including Slim Whitman, Hank Snow and many Hawaiian acts.