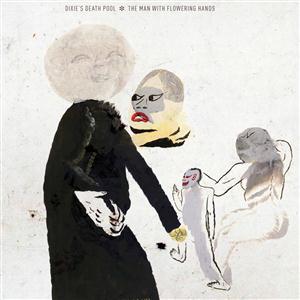 buy the album at their site here: http://dixiesdeathpool.com

Lee Hutzulak is probably looking at ghosts and spectres over my shoulder while we’re drinking coffee at Kranky Cafe on a crisp autumn morning. I can’t shake the feeling during my interview with him that this artistic clairvoyant is working on a more inspired and ethereal level of existence than myself, and nowhere is this more evident than on The Man With Flowering Hands, his latest release under the Dixie’s Death Pool moniker. Bound with an acoustic guitar but bursting with colorful samples, recordings, and instrumental contributions from a long list of Vancouver musicians, sitting down to discuss the downright weird and mystifying recording with Hutzulak and his brother Todd—who added guitar, bass, trumpet, and clarinet, among other instruments, to the collection—was like peeking at the inner workings of a complicated timepiece.

Discorder: How long has this record been in the making?

Lee Hutzulak: I think the oldest thing on it is the title track, which we recorded in 2004 starting with a broken piano.

D: And that was the basis for the track?

LH: I dug it out in 2010, scraped off a whole bunch of awful stuff and went back to the root of that song and got really excited about it again.

D: There are a lot of musicians’ names attached to The Man With Flowering Hands. Do you see your role within the group as a composer?

LH: A lot of it is improvised—composing in the act of overdubbing, I guess.

Todd Hutzulak: Whenever I get together with Lee, maybe there will be music already, or maybe I’ll just play and meld, twist, shape it into whatever it’s going to end up as.

LH: I don’t know if it really feels like a collage. I’ve tried to blur the edges as much as
possible.

D: Are you comfortable playing this album in a live environment?

LH: There’s a few songs on the new album that I could play live—it would sound quite different, but the root of the song being played on an acoustic guitar is the same.

D: Do most of the songs follow that structure?

LH: The track “A Return To Science Fiction” was improvised on the spot, with all the instruments, and then we came up with other sounds to layer on top. I would liken it to Talk Talk trying to play [their 1991 album] Laughing Stock; it’s not an album that’s meant to be performed. The recording is the work of art, and the live show would be something different altogether.

D: Can you talk about the recording techniques you used on this album?

LH: I’ve used a lot of hand-built, homemade instruments to make [the sounds on the record]. The main one, I guess, is the “Epic Frying Pan,” which is a cast-iron frying pan with desk-lamp springs strung over it—it’s like a spring reverb that you can throw around. I played with rubbing a guitar pickup over the springs or attaching it to the underside. In “Paper That Folds Itself” there’s some field recording, so that opens up the limits of the sound palette quite a bit, because certain acoustics and ambiance you can’t achieve inside.

D: Can you elaborate on the field recordings?

LH: The ones that hit me the most are the trains down on Alexander Street—listening to the trains hitch up together, it’s just huge. We had a family reunion on Salt Spring Island recently and I wasn’t sure what I’d get—the first time I went there in 2007, I got this morning chorus of birds in the woods as they were waking up, but this time I got some sounds of a dock and a rowboat knocking against it. You can hear that on “Paper That Folds Itself” too. Being out there on the water jumping up and down on this dock, that kind of physical energy, I hope, made its way into the song.

D: You recently got back from Japan. Had you recorded anything there?

LH: Crickets! You don’t hear crickets in Vancouver. I was up at three in the morning [recording them]… from different perspectives, there was a lot less activity. I noticed [after listening to the recording] that there was a newspaper being delivered by moped—when you’re recording something that quiet you [can] hear a car miles away.

D: The title of your album, The Man With Flowering Hands, comes from a drawing you completed in 2009.

LH: There’s not necessarily any correlation. I’m attaching a title to a visual image, but it’s also making a mental note of it to somehow work its way into the music. It’s there as lyric fodder at some point, to become a line in a song. I tried to write a song about the man with flowering hands, but it hasn’t gone anywhere yet.

(We wrapped our interview here, but Discorder still had a few more q’s for Hutzulak, which he responded to over e-mail).

D: You mentioned that your mandate was to create music that you wanted to listen to, and that you’d created some music in the past that you wouldn’t listen to again. How has this documentation made you change as an artist?

LH: For the better part of the last decade I was pretty much improvising exclusively, and recording a ton. A lot of it for me was about developing language and technique. It almost didn’t make sense to me to play without recording. It was incredibly refreshing and freeing from the world of song, an extended sojourn in the sonic wilderness. While improvisation will always be an important part of my work musically, it is only a piece of the picture. My greatest love as an artist is the studio album, and crafting what I call pop songs. Pop songs and breathing spaces for them to live in. Improvisation and experiment is big part of what makes pop music magic though. I believe the most successful pop songs (to my ears) are the result of this type of innovation. Sometimes the experiments in improv were more than anything else about exploring the edges — getting out of the comfort zone, experiencing your personal ugly. Listening to your personal ugly can lose its luster — maybe it’s not really meant to be listened to over and over again, unlike pop music.
-Discorder