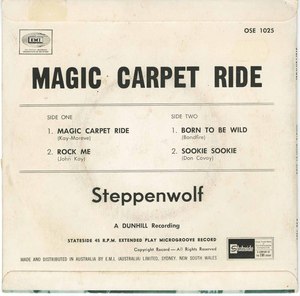 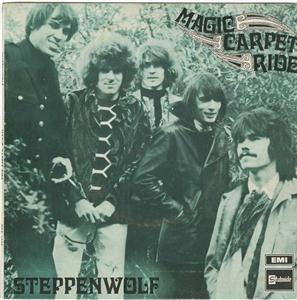 Though tangentially identified with late-1960s West Coast psychedelia, Steppenwolf's music was uncompromising hard rock, and the term "heavy metal" was popularized in their first hit, "Born to Be Wild."

Leader John Kay, never seen without sunglasses in part due to the fact that he has been legally blind since childhood, escaped from East Germany to West Germany with his war-widowed mother in 1948. Ten years later he emigrated to Canada with his mother and stepfather. A gym teacher who could not pronounce "Joachim" informally rechristened him John; several years later he adopted the Kay surname. In 1963 Kay and his family moved to Buffalo, New York, then to Santa Monica, California, where Kay fell into the burgeoning folk-rock scene and appeared on his first record playing harmonica on a song called "The Frog." He played around the country as a folk singer, and in New York met Jerry Edmonton, of a popular Canadian group called the Sparrows, a group that included Bruce Palmer, who was later replaced by the bass player from Neil Young and Rick James' group the Mynah Birds, Nick St. Nicholas. In 1965 Kay joined the Sparrows, followed by another ex-Mynah Bird, Goldy McJohn. The group toured and recorded (including an early version of Hoyt Axton's "The Pusher") without success and eventually broke up. In 1968 ABC-Dunhill producer Gabriel Mekler encouraged Kay to re-form the group and offered them studio time to make demos. Jerry Edmonton's brother Dennis (a.k.a. Mars Bonfire) offered the group a song he'd written for his solo album, "Born to Be Wild." Opposed to reviving the Sparrow name, the group went with Mekler's suggestion, inspired by the Hermann Hesse novel he had just read: Steppenwolf.

Steppenwolf's hard rock won them favor with local audiences, and Steppenwolf (#6, 1968) yielded "Born to Be Wild" (#2, 1968). The Second yielded another massive hit single in "Magic Carpet Ride" (#3, 1968), and around the same time, "Born to Be Wild" and "The Pusher" were featured in the film Easy Rider, more or less solidifying Steppenwolf's enduring identification as a biker band. At Your Birthday Party (#7, 1969) continued the streak with "Rock Me" (from the film Candy) (#10, 1969). Early Steppenwolf (#29, 1969) consisted of older Steppenwolf demos. Despite having a tough image (Kay was never seen in anything but his shades and tight black leather pants), Steppenwolf, which by 1969 included two members whose families had escaped postwar Germany, was an unabashedly political band. Contrary to a popular rumor, Kay did not run for an L.A. city council seat or any other elected post. However, he was always regarded as a highly articulate and thoughtful spokesperson for his political beliefs, most clearly articulated on the critically blasted concept work Monster (#17, 1969). From this album came two singles: "Move Over" (#31, 1969) and the title track (#39, 1970). Steppenwolf Live (#7, 1970) contained the group's next-to-last Top 40 single, "Hey Lawdy Mama" (#35, 1970). Although the big hits stopped coming, Steppenwolf remained a popular live act here and abroad, and their later albums —Steppenwolf 7 (#19, 1970), Steppenwolf Gold/Their Greatest Hits (#24, 1971), and For Ladies Only (#54, 1971) —fared respectably, despite a lack of focus and a series of personnel changes. In early 1972 the group announced its first breakup. Goldy McJohn formed a group called Damian, and later Manbeast. Edmonton worked with a band called Seven. By the first breakup, Kay had already formed the John Kay Band and recorded his first solo album, Forgotten Songs and Unsung Heroes. He had a minor hit single in 1972 with "I'm Movin' On."

Lack of success with their individual projects brought Kay, Edmonton, and McJohn, along with latterday member George Biondi and Bobby Cochran (nephew of Eddie Cochran, he had worked with the Flying Burrito Brothers and Bob Weir) back together for Slow Flux (#47, 1974), which included "Straight Shootin' Woman" (#29, 1974), the group's last Top 40 single. McJohn departed soon after, and Andy Chapin (who would die in the plane crash that killed Rick Nelson) replaced him. When Chapin declined to go on the road, he was replaced by Wayne Cook. This lineup recorded Hour of the Wolf, the first album of new material in the group's history not to reach the Hot 100. Dispirited, Steppenwolf broke up again in 1976. Kay continued with a solo career, but reassumed leadership of a new Steppenwolf lineup in 1980. In the years between 1976 and 1980 several former members had toured with unprofessional, bogus versions of the group (Kay and Edmonton owned the name). Since then John Kay and Steppenwolf have recorded regularly and toured North America, Europe, and the Far East. The group has appeared at Farm Aids II and III. In 1989 Kay moved to Tennessee, where he now lives. In 1994 he published his autobiography, cowritten with John Einarson, Magic Carpet Ride: The Autobiography of John Kay and Steppenwolf.

Most of the former members of Steppenwolf have remained in the music business. McJohn performed in and around Seattle; St. Nicholas ran a management company and performed Christian rock; Monarch formed Detective and had a country songwriting duo, Stevens and Monarch; Byrom worked as a country sessionman. Rushton Moreve died in a car accident. Jerry Edmonton, who married the widow of former Steppenwolf member Andy Chapin, was also killed in a car wreck.