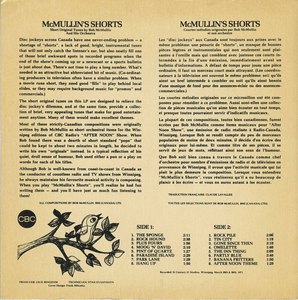 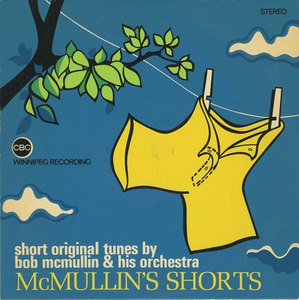 Robert or Bob (Wesley) McMullin. Composer, arranger, conductor, brass and winds player, b Lewiston, Utah, 29 Apr 1921, naturalized Canadian 1946, d Regina 3 Jan 1995. Robert McMullin was taken at age four to Raymond, near Lethbridge, Alta, where he had a year of piano lessons in 1935.

Robert or Bob (Wesley) McMullin. Composer, arranger, conductor, brass and winds player, b Lewiston, Utah, 29 Apr 1921, naturalized Canadian 1946, d Regina 3 Jan 1995. Robert McMullin was taken at age four to Raymond, near Lethbridge, Alta, where he had a year of piano lessons in 1935. He had no other formal music education. He played drums in local dance bands, and after leading an RCAF dance band in Europe during World War II as a saxophonist, he settled in Edmonton. His first major work, Sketches from the Rocky Mountains, was completed in 1948 and premiered that year by the Toronto Symphony Orchestra under Sir Ernest MacMillan. It was performed later by the Montreal Symphony Orchestra and, with the composer conducting, by the Edmonton Symphony Orchestra. The Toronto Symphony Orchestra recorded McMullin's second 'sketch', 'Pass River,' in 1950 (RCI 19). In 1952 McMullin wrote Essay for Orchestra on commission for the Edmonton Symphony Orchestra.

Additional Arrangements and Compositions
Robert McMullin arranged music for LPs by the US singer Enzo Stuarti, the country singers Ray St Germain and Laurie Thain, the Winnipeg baritones Yaroslav Shur and Terry Smith, the Metro-Gnomes, Paul Grosney's Kansas City Local, and the St Michael's Cathedral Choir School, and for his own LP, Bob McMullin and his Music (1966, CTL CTLS-5078). His arrangements of songs by Winnipeg's Randy Bachman and Burton Cummings (Guess Who? Medley, 1982) and by The Stampeders (Stampeders Medley) are held in the Imperial Oil McPeek Pops Collection. McMullin wrote That's Jazz, a dixieland medley performed by the National Press Club and Allied Workers Jazz Band with the Ottawa Symphony Orchestra, and arranged Roumenya and Kolomeynka, premiered in 1990 by the Winnipeg klezmer band Finjan with the Winnipeg Symphony Orchestra.

Among McMullin's other concert works are Prairie Sketches (1958, Waterloo 1960; commissioned for school orchestras by the Ontario Music Educators' Association and premiered in April 1959 by the CBC Symphony Orchestra); Concerto for Orchestra (1974); Concerto for trumpet and orchestra (1979, commissioned by the US trumpeter Doc Severinsen); Colony Trek (1988, an historical narrative, for the Saskatoon Symphony Orchestra); and Fanfare (1988, for the Dallas Symphony Orchestra). In 1991, with lyricist Ernie Mutimer, he completed the operetta Cannington Manners. McMullin continued as music director and conductor with Winnipeg's Rainbow Stage in the 1990s, working on such shows as Brigadoon (1994).
-The Canadian Encyclopedia