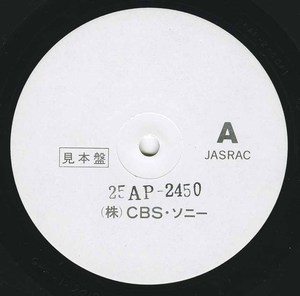 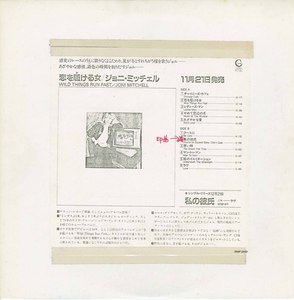 Joni Mitchell's music has taken dramatic turns over the past fourteen years, and she has produced a classic in each of three styles: folk (Blue), pop-rock (Court and Spark) and pop-jazz (Hejira). Lyrically, love has been Mitchell's main concern–the word gets fifty-seven mentions on this LP–and her shifts have been more subtle: from the arched but intimate innocent to the Hollywood high-lifer and, finally, to the romantic on the run from experience.

Wild Things Run Fast might have been called Court and Hejira. It is almost a great record, on a par with For the Roses and Clouds. It alternates rhythmically scratchy rock with cocktail jazz keynoted by Larry Klein's elastic bass and Wayne Shorter's soprano sax. Similarly, it splits lyrical concerns between what happens at people's parties and what goes on in Mitchell's solitary salon.

Thoughts on love dart through these songs like foxes in the underbrush, seeming at once to build toward answers, then tripping over contradictions. "Nobody's harder on me than me," sings the marooned lover in "Moon at the Window," bitter that people taste love and toss it but grateful that emotional thieves can't steal the sky. The images are rich and the jazzy vocal is warm, with harmonies cresting to imply a negative response to the question "Is it possible to learn How to care and yet not care?" By contrast, the singer's counsel in "Be Cool" is to "Smile–keep it light Be your own best friend tonight." "Be Cool" is a lightweight social study compared to an emotional imbroglio like "Moon at the Window." The lyrical slightness of "Be Cool," as well as the title cut and "Ladies' Man," is reflected in their flat musical settings.

More ambitious is "You Dream Flat Tires," the album's best uptempo pop-rocker. "Woman she bounce back easy But a man could break both his legs," sings Lionel Richie in a vocal cameo. In the next song. "Man to Man," Mitchell ponders the price of failures and flat tires. "I don't like to lie," she admits, her voice caressing the shuffling melody, "but I sure can be phony when I get scared." Wild, wary and most assuredly scared, she looks at her new lover and wonders if he or she can still care.

But those kinds of romantic ruminations are reduced to so much rhubarb in "Solid Love" and Leiber and Stoller's "(You're So Square) Baby, I Don't Care," the album's two standout rockers. Who needs to be cool when your baby just wants to kiss you "sweet and strong"? And when you've got a "solid love," why not damn the doubts with a simple, "Hot dog, darling"?

It's appropriate that an album so immersed in love should end with the gospel. "Where, as a child, I saw it face to face Now I only know in part, fractions in me, of faith and hope and love," Mitchell sings in "Love," whose lyrics are beautifully adapted from First Corinthians 13:11-13. Albums like Blue and Court and Spark were bolder, younger steps; but now the older woman, wiser to the ways of the world, is satisfied to stake out smaller victories. By closing Wild Things Run Fast with a simple quote like "Love's the greatest beauty," Jo?? Mitchell is not saying anything that she hasn't said before, but she's changing the context. Finding love's spark in old pop tunes and older scriptures, she cops to the clichés of romance and, more than ever before, positions the struggle as a spiritual imperative. Dreaming on a dime, she listens to the past with hope for the future.
-John Milward