Subhumans - Death Was Too Kind (re-issue) 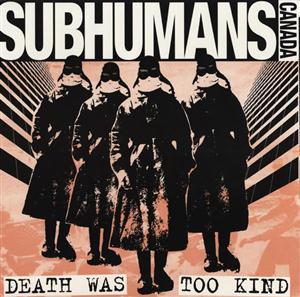 It may come as a shock to those whose impression of Canada is largely shaped by SCTV, Due South, and the NHL, but Vancouver actually has a long history of well-respected punk. NoMeansNo and D.O.A. often immediately spring to the historical forefront, with the Subhumans left struggling under the word spread by rare vinyl pressings coveted by Ebay snipers with no friends. They originally saw release in limited runs and few survive intact today. Word of mouth just got a shot in the arm thanks to Jello Biafra’s Alternative Tentacles.

Death Was Too Kind picks ten of their most hardcore relics from 1978 to 1982, including their first single “Death To The Sickoids” (a scathing rebuke of the cultural meme wars years before Adbusters hit the stands), their Bob Rock produced self-titled EP (recorded years before Bob fell in with Metallica), and “Pissed Off… With Good Reason”, one of two cuts only previously available on a local 1996 compilation. Brutal honesty is the order of the day for b-side “Oh Canaduh”—a song that begins with a couple bars of the national anthem before rubbing the corporate welfare state in the faces of typical Canuck complacency—and “Slave To My Dick”, which is not so much cock worship but an expose of straight male sexual lunacy. It’s ten short jabs that follow through and deliver the absolute best punk music ever made at the time it was most relevant. If you don’t think so, like the song says, “We don’t care what you say / Fuck you!”
-Alan Ranta, PopMatters

Subhumans and DOA were the two pillars of the Vancouver, BC, Canada punk scene who caught Jello Biafra's attention and were spotlighted in the landmark Alternative Tentacles compilation Let Them Eat Jellybeans. The Subhumans, first active between 1978 and 1982, were the more elusive of the two, with many out-of-print releases fetching bank on eBay and making it difficult for present-day fans to connect the dots.

Now, the Subhumans join the Alternative Tentacles Re-issues of Necessity pantheon with Death Was Too Kind, a collection of material from the early years, lovingly remastered from original source material: the very first single Death to the Sickoids (only 500 were pressed); the Firing Squad single; the self-titled EP produced by Bob Rock, who went on to work with Metallica, The Cult, Offspring, etc.; "Look at the Dawn" and "Pissed Off... With Good Reason," two virtually lost songs (only available on the 1996 collection CD released by Essential Noise in Canada), especially remastered for this reissue from the original tapes by Jesse Gander at Hive Studios.

Death Was Too Kind features the band's best-known lineup with Wimpy Roy, Gerry Useless, Mike Graham, Dimwit, and Jim Imagawa. Both the LP & the CD come with liner notes!