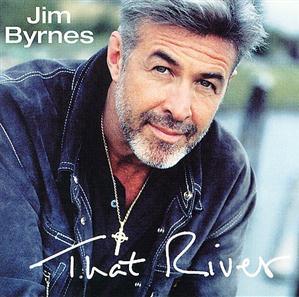 Born in 1948 in a city know for its blues this singer, songwriter, guitar player, and actor has the perfect voice to play the blues. James Thomas Kevin Byrnes began his musical career at age five on the piano. But Jim Byrnes also had another passion, one that he is known for more than his music, acting. Seen as a regular on "Wiseguy" and "Highlander" and guest appearances on "Highlander: The Raven", "The Dead Zone", and the voice for animated characters it was in his role as immortal Duncan McLeod's watcher Joe Dawson that much of the world got their first glimpse of Byrnes musical abilities.

After returning from Vietnam unscathed Byrnes moved to Canada to resume his acting career. An automobile accident one night that took both his legs derailed Byrnes acting for a time and it was then that Byrnes took to his music seriously. "That River" is the third album from this Juno Award, Leo, Genie, Maple blues, Canadian Folk Music Awards winner and member of the British Columbia Entertainment Hall of Fame members.

This eleven track album of original and cover tunes shows that you can take the boy out of St. Louis but you can't take the St. Louis blues out of the boy. Among the tracks on the album in a jumping rockabilly song to get things started and a haunting rendition of the Duke Ellington piece "I Got it Bad".

It may be called the blues but the music of Jim Byrnes is high energy songs that makes you feel good, not bad.
-Sherrill Fulghum