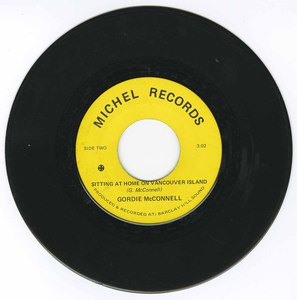 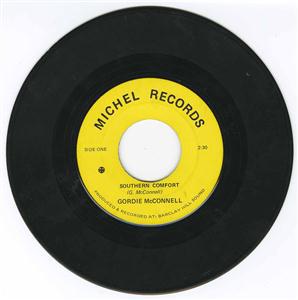 "The mountains, the valleys, the forests, the ocean, where all of God's work is unfurled.

"When I sit at home here on Vancouver Island, I'm sitting on top of the world."

Go to just about any bluegrass or bluegrass country jam session in Port Alberni and you'll find Gordie McConnell. He'll be on stage for most of the session, playing the guitar, the fiddle, the dobro, the five-string banjo, or the bass.

Ask him to play any tune in the old-time repertoire, he'll know it. Even if he doesn't, he'll improvise a great accompaniment to any vocalist without a back-up band. Local musicians and their entourage of fans revere him.

McConnell has held a lot of different jobs in his lifetime, but he's always been a musician.

"I've been plunking away all my life," he said. "Never took lessons, just picked up from other people. You grow up with it - it's what you do. Everybody in the family sang. My dad played the fiddle when he was young but he smashed his hand pretty good so he had an autoharp. He was about 58 when I was born so he knew all of the old songs - every song that was ever written. I'm about the same. I have a memory for songs. I know thousands and thousands of them. When I was young, if I heard a song two or three times I would know it. Now, I can learn a tune, but a week later I don't have a clue what it is."

McConnell grew up on a mixed farm on a quarter section of land in Manitoba, where country people knew how to entertain themselves with house parties and dances every Friday night at the local school. Around 1965, he moved to Port Alberni in search of employment. After drifting through a series of "odds and ends," he settled into steady work at the Somass Division's shingle mill. His parents and two of his five siblings eventually followed. One brother and both parents are buried here.

In 1967, McConnell started his first band. Some of his early performing experiences with the Northern Lights were unforgettable.

"We used to play down at the Social Club, near where the Alano Club is now. It was the worst place on the island, a holy terror, the place where all the crazies hung out," he said.

But things got better. Since the Social Club days, McConnell has started a lot of different bands and made a few records. He has played at such classy venues as the Queen Elizabeth Theatre, and has come in second to B.C. country music legend Jess Lee at the country music awards.

He has played with some of the best bluegrass musicians, including Frankie Rogers, Clarence White, Ron Block, and Ricky Skaggs' uncle.

"Ron Block has played with Alison Kraus for years and is a very nice guy," he said. While the big leagues of the bluegrass world have certainly tempted him, he preferred a quieter life.

"I've gone pro a couple of times but after about two months, I go crazy. It's just too intense," he said. "It just gets to you, constantly on the road, in strange places, with the same people all the time. All musicians have an ego problem. Five months and I'm ready to kill somebody. That's why people turn to drugs and so forth."

A prolific composer, McConnell has written "tons of songs" for every instrument he has played. But don't ask him where he finds his inspiration. He'll say he doesn't know.

"I just tinker around and they fall together," he said. "Write them down, record them, promptly forget them."

Some of McConnell's songs have become classics.

"I was just up at Cumberland at the B.C. Old Time Fiddle Championship. There was a little kid there nine years old could play like you wouldn't believe, and a girl 15 years old won the open championship. I'd never seen them before but they all played a tune that I wrote, called Prairie Falcon Waltz. That's the one everybody plays. And Sitting at Home on Vancouver Island is another one of mine that everybody knows and sings," he said. True West was the last big band he played with. Now he leads two bands: Grassmates and Hillbilly Fever.

McConnell met his wife, Myrna, at a dance in Port Alberni. Also an accomplished country vocalist and instrumentalist, Myrna often performs with her husband and is a member of Grassmates, who put out a CD of bluegrass tunes in 2009, called At Home on Vancouver Island.

Since a heart attack forced him to retire in the early 1990s, McConnell has devoted himself entirely to music, and gardening. His garden boasts over 100 varieties of irises. Recently he started planting dahlias "because they're simpler." One of his brothers, his daughter Gwen Smith, his granddaughter and great-grandchildren live in Port Alberni. His son in law Tony Smith was a faller who died in a logging accident in the Maggie Lake area near Ucluelet in 2005, at the age of 44.

"I like old music. I'm too busy to learn all the new stuff. I don't like the modern country and I can't stand modern rock," he said.

His life is a veritable tornado of musical activity. In the winter he plays at the Legion on Sunday from 3 to 7 p.m. Mondays he's with the Old Time Fiddlers at Abbeyfield from noon to 3 p.m. Tuesdays you can find him at the Hansen Hall jam sessions from 1 to 3: 30 p.m., where 50 to 100 people come out to dance. Wednesday evenings in the summer he'll be with the musicians playing down at the Harbour Quay. And Thursdays he plays at the Eagles Hall on Third Avenue all afternoon. Once a month he'll be at the Country Opera in Coombs "and wherever else we decide to play", including Echo and Fir Park Villages, Westhaven, and Abbeyfield.

McConnell has no favourite songs, no favourite musicians. And while he likes all kinds of music, he prefers bluegrass, which he defines as acoustic instruments without amplification.

"You can go with a bluegrass band, sit under a tree and play all day. That's how it's designed to be played," he said.