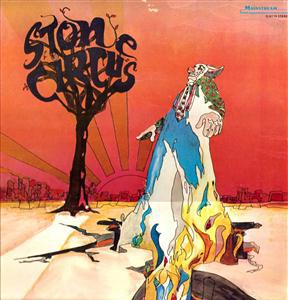 The Stone Circus LP has long been one of the holy grails to collectors of the legendary Mainstream label, but so little is known about it that the misconceptions have grown along with its monetary value. Thanks to the wonders of cyberspace, organist Jonathan Caine (actually Larry Cohen) cleared things up a few years ago. “First of all, we weren't from California. We were a New York-based band. In fact all of us, with the exception of Sonny Haines, were originally from Montreal. We moved to New York to form the group with Sonny and worked under the name the Funky Farm.”

As the curiously named Funky Farm, the five (Caine and guitarist Haines, along with singer Ronnie Paige, bass player David Keeler and drummer Mike Burns) managed to get their blend of psych-pop and experimental acid-rock into the Mainstream offices in 1969. Of course the melodic songwriting and the superb pairing of Hammond organ and freewheeling fuzz guitar hardly hurt their cause. Unfortunately, Stone Circus received no airplay or promotional support and was soon deleted, but has gone on to become one of the most sought-after major-label LPs of the period. What’s more, Cohen recalls the band’s shock when “…it was only when the album was released that we found out, much to our surprise, that the band had been renamed by Mainstream, Stone Circus.”

Virtually abandoned by their label, Stone Circus didn’t last very long. “We were together for a year and went our separate ways after the release of the record.” After returning to Montreal, Cohen co-wrote the sprawling 3-LP concept album The Diary of Mr. Gray with (former Footprint) Yank Barry, and later created CRIME (Creative Research Into Musical Expression) before settling in as a soundtrack composer.
-Robert Williston