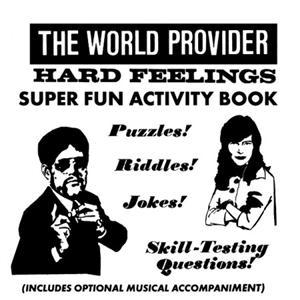 Feist, Snailhouse and members of The Besnard Lakes and The Royal Mountain Band appear on the album from Montreal's The World Provider.

Hard Feelings was released as a Super Fun Activity Book with puzzles, cartoons, jokes, skill-testing questions and a download code for the music.

The World Provider, the alter ego of writer/filmmaker Malcolm Fraser, started in Toronto in 1999 alongside the likes of Peaches, Feist and Gonzales. The one-man band later moved to Montreal and has expanded over the years to perform as both a duo, consisting of Fraser (vocals) and his wife Stacey DeWolfe (keyboards/vocals), and as a full band featuring Fraser, DeWolfe, keyboardist Kara Blake and The Besnard Lakes' Olga Goreas on drums.