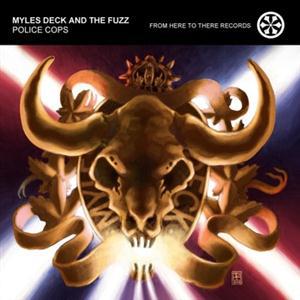 I’m halfway through a post highlighting the top artists to watch out for here on the East Coast, so get excited folks. In all seriousness though, with little to no fanfare, bands from the Maritimes are pumping out stellar release after stellar release and musically, I'd say these days are as good as almost any era I can remember (at least on par with Sloan, Super Friendz, Thrush Hermit and trailing only the dominance of the MC J and Cool G period).

Hoping to do my part, I’ve been going through as many of the new releases as I can, hoping to get people excited for the rest of ’08 and beginnings of ’09. So where am I going with this? Well, Myles Deck and the Fuzz are going to make the list. When they put out there last release, I said “instead of useless tracks about not fitting in and simple three chord progressions, Myles and the rest of the Fuzz hit you in the teeth with raw, Stooges style songs and a swagger that lets you know they don't give a fuck if you aren't into it.”

Flash forward to their new 7” – Police Cops – and it's obvious the band has found their stride. They still ooze raw energy, but the band seems to have tightened the screws. Everything sounds bigger, badder and most importantly, better. You might be able to credit some of that to the engineer who worked the session (Joel Plaskett), as he’s certainly helped fine tune the sounds of some other notables, but I think most of the credit belongs to Myles and his Fuzz.

It’s no secret that punk and garage bands get started because they can barely play their instruments and most never get past those sweat inducing three-chords and songs about girls, but Myles Deck and the Fuzz have moved past all of the stereotypes of a band hoping for a rebirth of sound. They might be firmly indebted to bands like the Stooges and the Stones and the rage of an era that has past us by, but they get better with each release and have the chops to make songs that are more than adolescent, teenage anthems. They have evolved to songs that are fist-pumping bangers that demand repeat listens and have something to say.

The lead single - Police Cops – is an anti cop smoker that could have been the voice of protest in the late 70s. Instead of another dose of the folk musings and slide guitar that dominate the indie scene, MDatF jump start the record with a surge of energy, nice oohs and ahhs, sing/shout choruses and raw power. Ayatollah uses terrific guitar work and booming drums to drive the song, but it’s the exhaled breath that cuts each line that makes the track such a success.

It might seem simple, but the band seems to know exactly how to control their fury and energy and keep you moving without overwhelming you. The first two tracks are rock solid, but the highlight of this vinyl slab is the closer. Boom Boom - at least for this band - is an epic (hitting the three-minute mark), but it shows the band can write songs that can appeal to a much bigger audience. It's a more mature sound, and one that hopefully the band can harness moving forward. With more and more people embracing that grit of garage rock, Myles Deck and the Fuzz should be getting more attention and hopefully that will start soon.

True Halifax punk rock and roll. Drop the needle and get out the fire extinguisher, the cops are on their way. For fans of The Stooges, Thin Lizzy, The Dead Boys and X.
-herohill

Produced and engineered by Joel Plaskett at his home studio: Scotland yard.