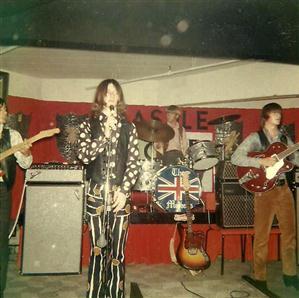 Frustration b/w The Love of the Loved (ONLY ON CITIZENFREAK)

Here are two previously unreleased tracks, recorded at the time the original album "Mod Is" was released, but were not included on the album. "Frustration" was written by Howard/Blaikley (Alan Blaikley & Ken Howard), the UK songwriting team who composed numerous British Invasion hits. "Love of the Loved" (Lennon/McCartney) was originally recorded by The Beatles in 1963.

After the Modbeats, Fraser Loveman formed The Fraser Loveman Group. "They were the most advanced musically with Dave Burt (Merryweather/Cano), Jhn Ord (The Paupers), and Doug Cartet (King Bisquit Boy). It was like a first super group. Metcalfe wanted that band so badly. That was one reason he wanted The Modbeats plus Fraser Loveman. They refused him.", says Loveman. Loveman went on to form the short-lived The Village S.T.O.P. with Paul Marcoux, Jim Hall, and Nick and Steve Urech. The Village S.T.O.P. produced only one single, recorded in 1969 on Ruby Records. There are other unreleased tracks. "Niagara bands were so overlooked and underproduced Ha! Ha! We appeared naked with just flourescent body paint (black light). We were huge on the eastern seaboard. Then Alice Cooper stole our act. But I'll tell ya one thing - The Village STOP outplayed anybody and put on a show like you wouldn't believe. We played gigs where major acts refused to go after us. The sheer force, colour, acrobatics and staging was unparralled at the time. The pix speak for themselves!" says Loveman.
check it out here: http://mocm.ca/Music/Artist.aspx?ArtistId=104891)

After a second version of the Fraser Loveman Group, Loveman formed Yenmore Blue. "Yenmor Blue was a house band at Grossman's Tavern in T.O. We were very popular. We recorded 4 studio tracks."