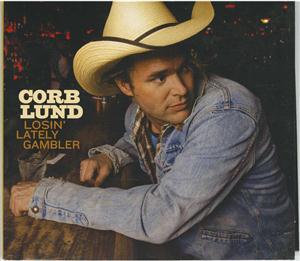 You might not know it from Taylor Swift’s recent sweep at the CMA ceremony, but country music was once made by people that knew what it meant to get dirt under their fingernails. Not that there’s anything wrong with beauty queens who can write and sing, but there just aren’t any rural roots to be found underneath all those platinum blonde hairdos. Yes, friends, real cowboys wrote and sang songs about real country life. And if you long for that era, Corb Lund is a worthy throwback to those days of old.

Losin’ Lately Gambler is filled with songs that lean more toward raising animals, than raising one’s profile among fellow high school students. (Sorry, Taylor, but it’s the truth). Anyhow, a song like “Talkin’ Veterinarian Blues” is what Bob Dylan would have sounded like in ’65, had he decided to herd cattle in Calgary, rather than sit by Woody Guthrie’s bedside learning the history of politicized folk music. It has a great lyric, too, which takes comedic shots at strip mall veterinarians. It will even make city folk chuckle.

The song “It’s Hard To Keep A White Shirt Clean” (Listen Here) sounds like something a mom might sing when doing laundry for her young boys. However, it’s more along the lines of “Working Man Blues” because this one has a lyric for those who wear white shirts to do blue collar dirty work.

Lund may be making some of the best modern Americana music these days, but the singer/songwriter is actually from Canada. All good country songwriters take pride in where they’re from, and Lund mentions his home country a few times throughout this work. One song is called “Alberta Says Hello”, while another is titled “Long Gone To Saskatchewan”. He even comes off like a John Denver-esque environmentalist during “This Is My Prairie”, which reveals sincere regional pride. In fact, Lund would fit right in at Farm Aid, if he hasn’t already been there. And to give “This Is My Prairie” extra emotional weight, the track features mournful horns played by Sonic Fedora.

Real cowboys love drinkin’ almost as much as they love their farms, and Lund reveals his passion for booze during a live in Australia recording of “Rye Whiskey/Time To Switch To Whiskey”. It’s not hard to imagine Willie Nelson leading his Family Band on this one, although it’s equally difficult to imagine him ever leaving “Whiskey River” off the set list.

Whiskey is a great analogy for real country music because it will likely go down harsh if you’re not used to it. Lund is a little rough around the edges and never tries to come off like a pretty boy country singer. And you see that type of “cowboy” all the time at country shows. These are the ones all dressed up in their Saturday night cowboy gear, yet you know for certain they never get their white shirts dirty! However, Lund dresses the ragged-but-right real deal from start to finish during this excellent release. If you give him half the chance, he may make you decide to throw away your near beer for his amber reality. And that would be a mighty good shot of reality.