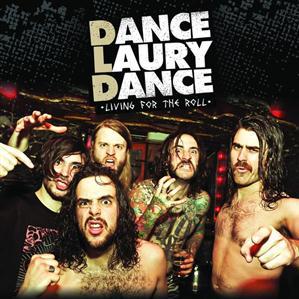 Living for the Roll

If Dance Laury Dance were a food, they'd be a paper plate dripping nachos smothered in that kind of orange sludge you have to label "cheez". And if Dance Laury Dance were a girl, they'd be the one you'd never dare bring home to Mom. You know the type. She has more tattoos than teeth and looks right at home swinging from a greasy pole in some dimly lit joint on the edge of town, the edge of sobriety, the edge of good taste and the law.

That kind of snack, girl and band can take months off your life, but sometimes you just have to cross the line, get your hands dirty. Life is too short to deprive yourself of all the good bad stuff. Just remember: Moderation is key. Or not.

Moderation is a bad word in the book of Dance Laury Dance. They come from the school of thought that more is, well, more. In the spirit of straight-ahead Rockers like AC/DC, Motörhead and Guns 'n' Roses, DLD put having a good time at the top of their to-do list. Also high on the list--with extra emphasis on "high"--is structuring songs oozing good time rock 'n' roll with lyrics about, what else? Women, booze and a wild road-warrior lifestyle.

They might not be a thinking man's rock band, but that's fine by their fans and me. Kiss never enlightened anyone but they sure as shit brought the party every night they hit the stage. As for DLD, I've seen them live on two occasions now. Simply put, their unrestrained stage presence is their bread and butter. . . melted butter. . . for lubrication, surely.

The first time I saw them live, DLD were one of the opening acts for Carolinian bad-asses, Valient Thorr -- Rock mammoths in their own right. I remember standing around, gazing into my cup of over-priced yellow beer and trying to stay awake long enough for the main attraction when, without introduction or much fanfare, this wild-eyed, hairy crew of dirtbags pounced on the stage and kicked a stunned gathering of maybe 30 people right in their big, bored faces. Before the end of the second song, the crowd had bulged to over 60, and the boys were in fourth gear -- never bothering with first, second or third.

With whiskers, wild hair and wailing guitars flying, these Heavy Metal disciples had clearly learnt all the right moves and mannerisms along with a few surprises. Between songs, frontman Max spoke of sex, drugs and rock and roll like he had seen the light and wanted everyone to take a dip in the warm glowing glow of hedonism and the high life. DLD's mandate is FUN. From catchy, simple songs about simple, catchy pleasures to a wild stage presence and a lead singer with a pirate's 'stache and a smirk to match. And how could he not smirk wearing a T-shirt with the words Wolf Fuckr across the front?

Like a six-eyed monster, DLD commands your attention. And even though their set was short, sweet and totally insane, I was lucky enough to catch them again, six months later, at RockFest in Montebello, QC. Obviously, those six months of touring, playing shows and spreading the word had helped garner a bigger following. Balls-out performances do pay off. It might take a while, but word of a solid live show spreads faster than any other type of hype. A formidable stage presence will usually take you farther than a million-dollar video or state-of-the-art light show or A-list record producer.

As for Dance Laury Dance, the word is spreading faster than the clap, and the timing couldn't be better. ( BTH ) spoke with frontman and main Wolf Fuckr Max Lemire about the new album (Living For The Roll), rocking out in la belle province and gobbling up the rock and roll lifestyle like a plate of good, bad, beautiful nachos. Here's to indigestion that hurts so good.