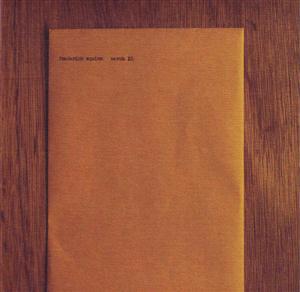 Originally, when I found out Frederick Squire had decided to bulk up his heartbreaking EP complete with three new songs, new titles, bigger sound and a more logical sequencing, I was simply going to express my jubilation and reiterate it was without question the best record I heard all year. I had already talked about how the seven songs were a stark, honest moment of clarity; an unobstructed view into the heart and mind of a man afraid to die and afraid love would never be enough to save him and really, three new songs – even if all three easily exceeded the expectations Fred set on the EP – wouldn’t change my opinion of the project.

Then I read Scott Bryson’s review of March 12 and even though he too loved the record, his words glossed over so much of what makes March 12 essential and largely ignores the effort Fred goes to forge a connection with the listener. Admittedly, it’s easy to gloss over the details; Fred’s a dying breed of musician writing songs for a type of music lover bordering on extinction. “The Future Of Tradition” – originally called “Frankie & Albert” and one of the best songs I’ve heard in years – is a song that demands the attention of an audience unconcerned with iPhones and text messaging, one that doesn’t need 15 people banging on synths, hand percussion or gimmicks. Inspired by “The Gambler and His Bride” (a song he, Daniel & Julie reworked on their fantastic folk record), Fred transports anyone that will listen to the prison floor and delivers a narrative of a loving husband comforting the women that killed him as she waits to hang. It’s gripping; the type of song that should stop you in your tracks provided the bar would just stop talking long enough for you to hear the hushed, inspirational words.

March 12 is full of some of the most beautiful, genuinely sad songs I’ve ever heard. The songs hit on emotions and fears so real that Fred just can’t turn and tell someone, so he writes songs to tell everyone. The songs are grown from women and the drink, but they aren’t songs about booze and broken hearts. Fred isn’t scared she might not come back. He’s terrified that love itself is the problem and he might fucking die alone. He isn’t staring at the bottom of the bottle to numb the pain, he’s drinking because if he stops he has to stare himself in the mirror and make the changes that seem as impossible as moving a mountain with his own two hands.

When you are left questioning where you fit in the world, fixated on the power of God and the certainty of death, true genius comes out. The loner gospel “It is in the Water” is built on plaintive strums, spot on harmonies and well placed distorted backing electric, but despite it’s sound, It’s in the Water (and the beautiful piano/acoustic “You Sing Low And We Will Sing High”) isn’t a song about salvation. He’s not looking up, praying for an answer that may never come, but he certainly knows the world is bigger than the two blocks of the seven block town he calls home. He’s lived his life, comfortable with the decisions and now seems content to wait for the final curtain call. That realization is as sad as anything on the record, but that transparent look into a broken man is exactly what’s missing from almost every artist making music today and what makes March 12 so important.
-herohill