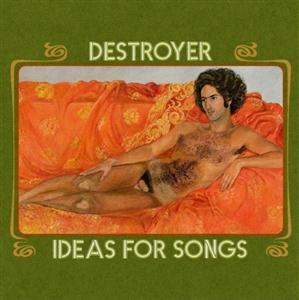 In 1997, Granted Passage Cassettes (now Triple Crown) asked Vancouver-based singer songwriter Dan Bejar for a contribution to a various artist compilation under the latter’s Destroyer moniker. Whether or not Bejar had an infinite backlog of extra material, wanted to play a lengthy practical joke, or was still gaining confidence regarding the strength of his emerging craft, the musician generously submitted over twenty tunes for consideration. Dubbed Ideas For Songs, Bejar’s home recordings were eventually issued as a sixteen-track private press Destroyer cassette and distributed amongst music fans across British Columbia. Emblazoned with an uncanny full-frontal image of a Bejar doppelgänger on the tape’s sleeve, it arrived on record store shelves less than a year before 1998’s City Of Daughters breakthrough.

In 2011, Triple Crown Audio Recordings is giving Ideas For Songs new life and the respect it deserves with a legitimate vinyl release . Enhanced by a fresh transfer of Welsh-born painter Sylvia Sleigh’s (1916-2010) original nude portrait artwork, top-notch tape restoration and dynamic audio re-mastering by Otic Sound’s Josh Stevensen, these formative 4-track Destroyer jewels, initially recorded between 1995-1997, provide Old Testament insight into the creative mind of a forward-thinking songwriter and far exceed the lowlife quality of current bootleg downloads. With nine full-length platters under his belt, Bejar has developed into Canada’s preeminent poetic troubadour—our generation’s very own Leonard Cohen if you will. Connected by a fearless approach to musical evolution and a deft literate touch, it’s easy to imagine that if Cohen and Bejar switched decades and Canadian provinces, we might have just caught Destroyer accepting his Grammy Lifetime Achievement Award instead of Leonard. Yes, our man Dan’s that good…

Ungovernable speculations aside, Ideas For Songs is guaranteed to deliver golden revelations and the purest of enjoyment to hard-core Bejar devotees as well as less obsessive Destroyer fans. More than just a collection of fly-on-the-wall recordings, the LP reflects an intimate capture of early twenty-something Bejar and his guitar, peppered to perfection with odd bits of tasteful effects, keyboards, and other instrumental bobs… Far from a wham bam cash grab and never before presented with such fine attention to detail, we encourage you to embrace this physical release, and Destroyer’s January 2011 Merge long player Kaputt, with that hard-earned bread. Your record player will thank you. Triple Crown thanks you too… Your vinyl collection deserves the best!

- Kevin “Sipreano” Howes (Voluntary In Nature, Light In The Attic)