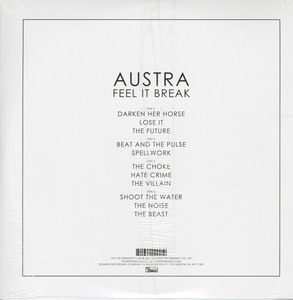 Austra - Feel It Break BACK 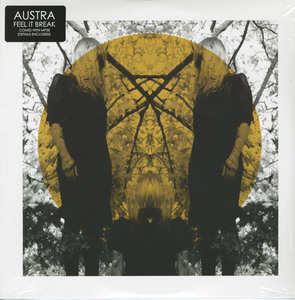 Cascading synths. Ass-shaking drum beats. Pained vocals. Songs with titles like “Hate Crime.” A healthy understanding of the works of Depeche Mode. A woman trained in opera. Songs fit for black nylon outfits and nights in seedy clubs. These are the building blocks of many new-new-new-wave careers, and are also the building blocks of Feel It Break, the debut album from Austra. It’s a challenge to make that well-worn template sound fresh, but through sheer force of will—and thanks to a magnetic frontwoman in Katie Stelmanis—Austra accomplish that in spades with Feel It Break.

While this is her debut LP with Austra, Stelmanis has bounced around the Toronto indie scene for a few years, performing with Galaxy, then as a solo artist, and then as a guest vocalist with Fucked Up. Feel It Break is the end result of four years of toying with her opera background (a trait she shares with an easy analog, Zola Jesus), orchestral arrangements, and MIDI experiments with drummer/producer Maya Postepski and bassist Dorian Wolf. As a result, Feel It Break is remarkably assured for a debut album; the sound, production, and songcraft are complete and confident.

Lead single “Beat and the Pulse” is as a good an entry into Austra’s realm as any, with Stelmanis holding her self-possessed calm in the middle of a bombing beat, oscillating synths, church bell clangs, and howled backing vocals. Stelmanis conjures the best of Nine Inch Nails, goth-pop, and nu-disco in one fell swoop, an act she repeats on highlights like “Lose It,” the piano-led “Shoot the Water” and “The Villain,” which sounds like a lost cut from the soundtrack of Labyrinth.

Though it was created in a string of studios and bedrooms, Feel It Break is built for the big time, as anyone who caught Austra at this year’s SXSW-- where the band (expanded to a six-piece live) blanketed Austin in performances-- can attest to. These are songs with big, swooping choruses (“The Choke,” “The Noise,” “Beat and the Pulse”), with moments for dancing (“Lose It,” “The Future”) and fist-pumping (“The Villain,” “Darken Her Horse”) that should make Austra an easy sell as a mid-poster band at festivals soon. While it would have been easy for Feel It Break to fall into new wave hero worship, it succeeds thanks to the singularity of Stelmanis’ vision. Feel It Break announces her as a force to be reckoned with.
-Prefix

On Feel It Break, co-founder and lead singer Katie Stelmanis, drummer Maya Postepski and bassist Dorian Wolf have crafted a dark, danceable masterpiece suitable for both ritual incantations and clubs; an album hearkening back to the sleazier side of New Wave but still deeply rooted in Stelmanis’s classical and operatic upbringing. Written primarily by Stelmanis and mixed by Damian Taylor (Bjork, The Prodigy, UNKLE), the album rests nicely with your Kate Bush and The Knife albums, but also conjures up the seedier sides of early 1980s British New Wave (think the dirty alleys and after-hours clubs dreamed up by Japan and Soft Cell.)