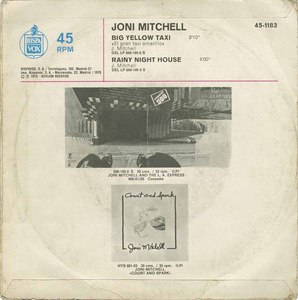 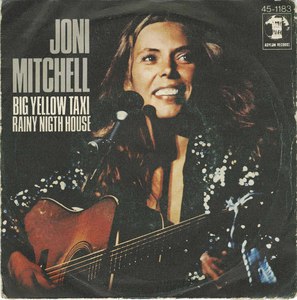 Mitchell said this about writing the song to journalist Alan McDougall in the early 1970s:

I wrote 'Big Yellow Taxi' on my first trip to Hawaii. I took a taxi to the hotel and when I woke up the next morning, I threw back the curtains and saw these beautiful green mountains in the distance. Then, I looked down and there was a parking lot as far as the eye could see, and it broke my heart... this blight on paradise. That's when I sat down and wrote the song.

The song is known for its environmental concern – "They paved paradise to put up a parking lot" and "Hey farmer, farmer, put away that DDT now" – and sentimental sound. The line "They took all the trees, and put 'em in a tree museum / And charged the people a dollar and a half just to see 'em" refers to Foster Botanical Garden in downtown Honolulu, which is a living museum of tropical plants, some rare and endangered.

In the song's final verse, the political gives way to the personal. Mitchell recounts the departure of her "old man" in the titular "big yellow taxi", which may refer to the old Metro Toronto Police patrol cars that until 1986 were painted yellow. In many covers the departed one may be interpreted as variously a boyfriend, a husband or a father. The literal interpretation is that he is walking out on the singer by taking a taxi; otherwise it is assumed he is being taken away by the authorities.

Mitchell's original recording was first put out as a single and then was put on the album Ladies of the Canyon in 1970. A later live version was released in 1975 and reached No. 24 on the U.S. charts. Mitchell's playful closing vocals have made the song one of the most identifiable in her repertoire, still receiving significant airplay in Canada. In 2005, it was voted No. 9 on CBC's list of the top 50 essential Canadian tracks.

In 2007, Joni Mitchell released the album Shine that includes a newly recorded, re-arranged version of the song.

There are various slight alterations of the lyrics from different versions. Joni Mitchell's original version runs

Bob Dylan instead of singing about the "big yellow taxi" that "took away my old man" sings "A big yellow bulldozer took away the house and land". Similarly, in Mitchell's live version of the song released on Miles of Aisles in 1974, she sings about "a big yellow tractor" that "pushed around my house, pushed around my land". She then repeats the same verse, but with the original lyrics.

Music video
An animated music video of Joni Mitchell's "Big Yellow Taxi" was produced by John Wilson of Fine Arts Films as an animated short for the Sonny and Cher TV show in the mid 1970s. The only commercial release of this full-length music video was in the Video Gems home video release on VHS titled John Wilson's Mini Musicals but also released as The All Electric Music Movie. The home video also contains an animated music video of Joni Mitchell's song "Both Sides Now".
-Wikipedia