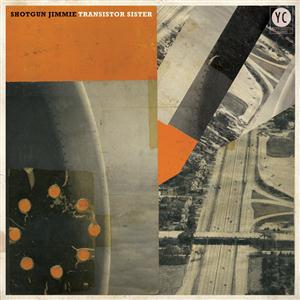 Former Shotgun & Jaybird member Shotgun Jimmie (aka Jim Kilpatrick) is two for two with his solo albums, earning rave reviews for 2007's The Onlys and 2009's Still Jimmie. Now, the New Brunswick songwriter is looking to make it a hat trick with Transistor Sister, due out March 8 via You've Changed.

Transistor Sister was written while on tour in Europe and features backing from drummer Ryan Peters (Ladyhawk, Lightening Dust) and Jay Baird (Do Make Say Think, Feist). A press release promises "a bunch of two-minute blasts of pop perfection," along with "a few all-out anthemic rock hits."

The album was recorded at the Old Confidence Lodge in Riverport, NS, with Diego Medina, making it the first Shotgun Jimmie record to be recorded in a proper studio. Despite the more professional environment, it promises to uphold "the experimentation and spontaneous sense of creation of the best home recordings. Run down the stairs, slamming doors, grab a weed whacker from the shed and mic it through a wah pedal."
-Alex Hudson

LATE LAST YEAR (a tribute to the chase)
The song is about those first few dates with someone super exciting. I admit that the disco beats and horns at the ending are questionable. I was going for this idea that sometimes it gets cheesy when you are falling in love. Cheesy and triumphant!

SUZY (back-to-back early courtship songs)
Suzy was my grade nine girlfriend; she was the coolest. She liked the Violent Femmes, and the Flaming Lips. She also introduced me to Kids In The Hall. The song was written in Berlin on a day off. I spent more time wondering where it came from than I did writing it. Now, I figure it was cause my European adventures had me just as full of excitement and pure joy as hanging with Suzy did back in the day.

KING OF KREUZBERG (dance music?)
I worked on this one for a few weeks. Its debut was very very early in the morning on a beach in Sant Feliu de Guixols, Spain. It was kind of a post show, acoustic guitar around the campfire affair, only instead of a campfire there was a big bin filled with beer and booze. The song is about being stoked about touring and wishing I had payed more attention in high school French class.

PAPER PLANES (proud anthem)
When I think of the community of people that I make music with, I feel pretty damn lucky to be part of the gang.

CONFIDENCE LODGE STAIRWELL RECORDING #1 (a tribute to studio experimentation)
The Confidence Lodge has many rooms. There are really big rooms, and really small ones; some are echoey, and some are dead sounding. One idea I had was to make a record with a song recorded in every room. We didn’t get around to that with Transistor Sister, but we did record all over the Lodge. We used the stairwell to get some drums sounds, and I had a lot of fun with that. The Confidence Lodge stairwell is three stories high. We mic’d a drum kit at the bottom and then had these really nice Royer ribbon mics on each landing all the way up to the top. I thought it would be nice to have a hi-fi recording of the stairwell with someone running down the stairs, as a tribute to the sweet acoustics of the stairwell, and ’cause we had to run up and down those stairs a million times while working on the record.

TRANSISTOR SISTER (update)
This was the first song I wrote for Transistor Sister. I was thinking about all the stuff that had happened since the last record and wanted the song to be like an update or a postcard home. “Everything is fine, I’m having a great time, wish you were here.”

TOO MANY FLOWERS (in the heart of the heart) A straight-up Sackville summer love song.

STEREO AND THE STOVE (turn it up)
This one is a really old song. Originally it appeared on an Out Of Sound compilation, then we tried to record it for Still Jimmie but it was cut. Ryan Peters had heard the song a bunch of times live, and I remembered him saying that it was his favorite of my songs. When I first thought of asking Ryan to play drums on the record, I thought of recording this song.

SWAMP MAGIC (sink or swim)
SappyFest and the parties that surround it. Campfires, drinkin’, smokin’, sittin’ on a haybale and singin’ a haybale song.

PIANO (instrumental)
I had words for this little ditty: “There’s nothing wrong with a sad song, as long as it ain’t too long.” I liked it better without the words.

PEACE AND LOVE (what?)
I’ve never written a song like this one, and I have no idea where it came from. Ryan Peters came up with the backup vocals: “bop, bop, bop, bop,” and he sings all of them. He made the song for me. During mixing, we did a mix of just the backing vocals and it sounded delicious!

MASTERPIECE (art rock)
This one is supposed to be a pretty light-hearted look at the heavy subject of making art. I was on the front porch of the Confidence Lodge, with a mic taped to a gas-powered weed whacker running through a wa-wa pedal and into a guitar amp.

THE HAZE (ballad)
There was a time when Strong John, Dick and I were living in Dawson Towne YT. Strong John and I refer to a period of that time as “The Haze.” We lost guitar straps, picks, tuners, tempers, button-up shirts, and golden song ideas. My excuse was “everybody goes through this when they are young.”

BAR’S OPEN (party time)
I wanted there to be a difference between the vinyl and the digital/CD, so this little guy was recorded to be a separate track and lined up in mastering. I also liked the idea that it would be played on its own from time to time. Kinda sounds like Shotgun and Jaybird?

BAR’S CLOSED
If I had known that this was gonna be the last song, I would have made the ending twice as long. The talking at the end is from a special SappyFest edition of my radio program Good Morning Duders:

“I’m still here at the breakfast here at the Legion Hall, the performers’ breakfast, and I have some real dandies right now just come in. Apollo Ghosts just showed up to have something delicious to eat; Darren’s already got a big plate and is quite excited by it; Jay is grabbing some carrot sticks. But Sappy Times are going out. Still no sign of Paul Henderson.”