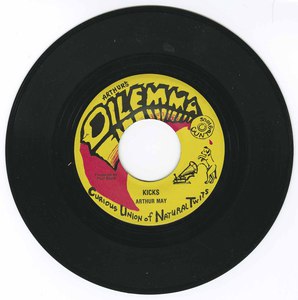 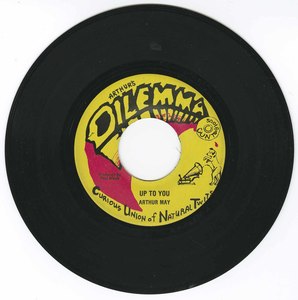 Up To You b/w Kicks

RW: hi Arthur, can you please tell me how Arthur's Dilemma got started, where were the band members from, what was the Canadian connection, did you tour in Canada, did you live in Canada, if so when; how did you guys meet, etc.

AM: It was my intention to go from the UK straight to NYC but they wouldn't give me a visa as the CIA had a file on me as a suspected lefty. I wanted to get out of London and make a fresh start so I went to Montreal, it was closest and cheapest. I went with only the name of an actor that a girl friend from Montreal who lived in London gave me.

When I arrived I met him and he introduced me to Tony Roman and his girlfriend Annette something (she was a film star.) He had a music promo set up and introduced me to New Wave Productions who were a group of preppies funded by the arts council there.

I wrote all the first material in a few days and they introduced me to Dug Dyer and Rick Barruco. We rehearsed with a drummer that just happened to be around the first time after that we used Eddie until we found a replacement in Dave Hazen. Rick left the group after a couple of gigs. He hated the drummer. Shaun Donolly replaced him, we called him prince cause he looked like one, years before the actual famous one appeared.

WE played at the Arc first. Where David Henman, a mate of Dugs was in residence with his group the Debutants, something like that. He was a good guy and is still a mate I'm in touch with. He realised what we were doing was more happening and he wound up supporting us after the first gig, very generous Dave. The Arc was a desert but within two gigs we had the place stuffed full of people. This went on for two weeks, by the end the place was as hot as the cavern. We had queues four thick that went around the block. When David left for Toronto with his band the owner asked us to continue on. I wanted a room, as I had nowhere to live then, on the street in winter...fucking don't go there. I refused as he was offering hardly any money. The Arc died overnight, he was a very stupid owner and lost a lot of business.

After that we played a gig at the Cinema parallel and went for a few days up north to play in a hick place, I can't remember the name, but it was full of lumberjacks who loved the show.

We only made one demo together of which two of the three songs you now have. One is broken beyond repair though I must ask Dave Hazen if he still has the master which I left with him, and I'll do that soon.

I made a recording of a song called 'Getting the Boy' I had no band then as they had gone off with someone to do standards and make money leaving me behind...just as well I wouldn't have gone anyway. So I used Rick Gunn on guitar. I remember him as a very long haired hippy always wanted to do Hendrix riffs. So I had to show him what I wanted. He did a great job in the end but couldn't understand why I wanted it so basic. There was a drummer who could play on the snare and his hat with bass drum and a couple of crashes. He was great, I can't remember his name, it was someone the producer found. Someone played bass too, it may have even been me, I can't remember, it was a drugged out, boozed soaked session, but I still have a copy and it sounds hot.

Before the band split I found Taylor Grant, who became my manager and followed me through to NY and later the UK where he married my best friend Lucy...the bastard :)) Taylor started the 364 St Paul's gig, which was an industrial warehouse affair in old St. Paul. I think this is years before house caught on in any way, and although Chicago were suppose the have started this we did it years before.

The gigs at St Pauls were really special. We set up a bar were we gave away free a punch for those who couldn't afford any booze and had a paying bar for everyone else. It took a load of money and I learnt just how well Canadians held their drink. The punch was in a plastic dust bin and contained fruit, red and white wine, cointreau, whiskey, vodka, grape juice, tequila, load of ice and the piece de la resistance, a couple of litre of pure alcohol, the stuff that makes you go blind if you make a habit of it. So you can imagine the scene.

This all happened between November 77 and April 78; then Taylor and I split for New York.

One thing I like to clear up are a few myths about the band. They sound good, but they are bullshit. There's a guy out there called Bill Lauren who's published these rumours. I'm not sure who he was but he claims that he was in the group. Sorry Bill, if you were you were invisible. But Bill has certain fact right although somewhat distorted. One is that I smashed my front teeth out on a microphone to show that I was serious about being a punk. Well, it's laughable. I did smash a tooth, but it was an accident. I used to swing to mic and dance in between singing and when I hooked it back my hand slipped and the mic carried on into my face and broke a tooth.

Another story is how I bit Dugs ear off. This did happen in a way but was not an act of cannibalism. Dug and Rick would share my mic from time to time and on one occasion I took Dug's earring between my teeth as he pulled away violently. It ripped his ear and a bit of blood appeared but it didn't stop us playing and Dug thought it was funny as so did the rest of us. According to Bill, this broke the band up. The band only broke up because they needed money and there was a gig away from Montreal and I couldn't be bothered to wait for them to get back. When I set up in NY I sent for them, but they decided to pass, so I went to find new musicians. And finally, Bill said that I used to start my gigs off by coming in from the back of the audience punching everyone on my way. This is bollocks. Yes, I sometimes started that way to get people on their feet. I used to dance and pogo all over the place bumping into tables and upsetting them, pulling people up from their seat and generally causing havoc, but I never went around hitting anyone. This guy made me out to be a right psycho case!!! By the time I got on stage everyone was grappling and bopping about, and that's why I did it.

OK Mate, that's the meat and potatoes of it all. If you want to ask me anything else feel free.

OH I lived in Wolf Street till I ran out of rent. I was in the street after that a few days before a Princess rescued me, she paid for the demo too as well as save my life. After that Dug and Strawberry put me up and when I met my manger Taylor, he has a big place on St Laurent and I lived there till we split.

RW: excellent and posted. again, great story Arthur. thanks for sharing on mocm! still not sure if any of you guys in the band were Canadians?

AM: I can confirm they were all Canadian. Dug Dyer later changed his name to Doug Danger (Yuk) considering his real name was Dyer. Shaun, Rick and Eddie are also. Rick in in Toronto now you can see him on my friend's list. Rick Gunn is also a well respected guitarist still, athough an honery member. Dave Hazen is still in Canada when he's not globe trotting and can also be found on my FB list. Shaun is out there somewhere I have tried to locate him. As for Dug, he's disapeared, I have tried to find him through David Henman, also on my list. So the only Brit was I.

check out the unreleased tracks pieced together here: http://mocm.ca/Music/Title.aspx?TitleId=319201