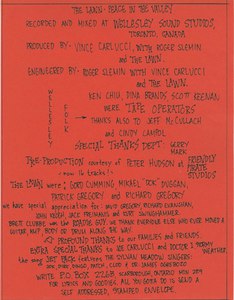 Lawn - Peace in the Valley insert 01 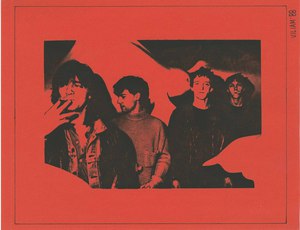 Lawn - Peace in the Valley insert 02 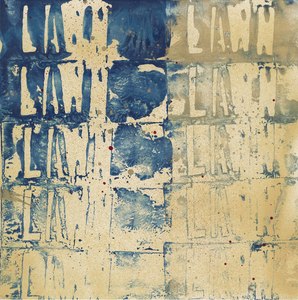 More people might be aware of The Lawn's greatness today had their marvelously memorable tunes like Beluger, Catwalk Slip and Reconsider Baby been made available in the digital format. They all appear on the group's first and best album, 1986's Peace In The Valley LP, self-released in an edition of 500 vinyl copies (only 100 of which came with silk-screened sleeve art) and never reissued. Incredible but true.

Although you were scene contemporaries of Blue Rodeo, The Rheostatics, Change Of Heart and Tulpa, the Lawn had a totally unique sound unlike anything else happening in Toronto at the time. In fact, I've played Peace In The Valley for a couple of people who thought you might be from Manchester because you reminded them of The Smiths. How did you arrive at your sound?

We didn't contrive to be different like the weird guy at school but at the same time, we never wanted to do what the other bands were doing. We each read good books, watched cool films and listened to amazing music. We all grew up with the early Who, Beatles and Stones records. As teenagers, we just assumed everyone else was also buying import singles by The Fall, Gang Of Four, the Buzzcocks and Pere Ubu at the Record Peddler as soon as they came out. But I'd have to say that growing up, learning to play guitar and sing with these guys had a lot to do with the individuality of our approach.

At the risk of sounding like a dick, when R.E.M. became popular, we had to change our sound slightly because we'd already been doing the jangly thing. Then about a year later, the Smiths came along and it was like "Oh shit, not again – everyone's gonna think we're ripping off the Smiths." So we made a few more adjustments. There could be a logical explanation why Johnny Marr was playing similar stuff on guitar as Patrick (Gregory) on the other side of the Atlantic at around the same time – maybe a shared Richard Thompson inspiration – who knows. It's strange, but those kinds of odd parallels have happened throughout music history.

Prior to the Lawn, you were already using lap steel and slide guitar in a decidedly non-country, non-blues fashion with the group's precursor band, Woods Are Full Of Cuckoos. What prompted the unusual choice of instrument and what influence did it have on your singing?

In the Fall of 1979, I went downtown with my friend Julian with the idea of buying an electric bass. On the way, Julian says, "I don't know why you're buying a bass when you can't even play one. You like Poco so much, why don't you get a pedal steel guitar like Rusty Young and be the first country punk!" So I came home with a 1958 Gibson lap steel and tried running it through a bunch of distortion pedals to use it to make ambient noise kinda like what Allen Ravenstine was doing with Pere Ubu. I'd just fool around tweaking different things until someone would say, "hey, that sounds cool" and then I'd be like "hmm, let me see if I can do that again." Everyone else was experimenting with stuff so we didn't think having a lap steel in the band was that weird.

I taught myself to sing like I taught myself to play lap steel and slide guitar. The slide parts I play and my song lyrics are both based on melodies I hear in my head. Over the years, I've been told many times that what I'm playing is wrong and that I should learn some theory but I've always been worried that taking lessons might alter what I'm doing – not for the better.

How challenging has it been to get The Lawn up and running after such a lengthy hiatus?
There have definitely been a few surprises. Listening back to some of the old recordings, I was amazed that we could play some of that stuff and so fast. We were all much younger, pumped on adrenaline just trying to keep up with each other. One part seemed particularly complex so I thought would take a few hours at home to figure out but once I started into it, everything just came back like magic. Muscle memory I guess.

With Mike (Duggan) firing on all eight cylinders, and somehow remembering every little drum shot and riff he used to play, it definitely made it much easier for the rest of us to find our place and play our parts. There have been a few bum notes here and there during rehearsals but there was the first time around too. The important thing is that the feel of The Lawn is there and that's what I'm really happy about.

All the songs we ever played were written as a group where we each developed our own parts, sometimes at rehearsals but often on stage during shows with the spontaneous feedback of our audience – it was an interactive process. So we're very fortunate to have all of the original members involved. No disrespect to all the great musicians who did fill-ins for us over the years but I really don't think it could be The Lawn without these four people playing together. We have a chemistry that can't be duplicated.