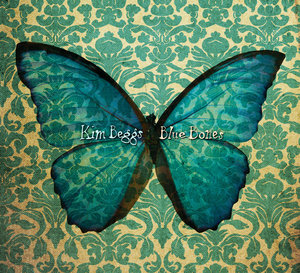 “Kim Beggs is the real deal”, says Now Magazine (NNNN) while the Globe and Mail says, “She has patiently built up her songwriting craft, without losing her open-hearted spirit or her direct and vulnerable singing style.” Her album Blue Bones was the iTunes Spotlight feature for Indie Singer Songwriter in August, while the Globe and Mail declared Maiden Heart (Blue Bones) an Essential Track. Blue Bones has been released in Canada, the US, Germany, the Netherlands and the UK.

Beggs is an award winning, original talent who makes music that transcends style and fashion. Without so much as a backward glance at what others consider ‘hip’, she instead makes music that is true. Bold, brilliant, dark and sincere, and with an instantly recognizable voice that blends sweetness and grit, the Yukon-based singer/songwriter (and sometimes carpenter) tells stories of love, blues, bones and the North on her third album, Blue Bones, which is the first for the Black Hen label (BC). http://www.kimbeggs.com

Blue Bones has rarely left my CD player since I first heard the album in the spring.”
- No Depression

“The sweetly meandering melody, combined with countrified guitar and the gritty harmonies of American musician and producer Gurf Morlix, is the very definition of rootsy charm.” - Exclaim

“If Kim Beggs was making music when Joni Mitchell and Neil Young were getting their starts, this Yukon-based singer would be huge.”- Metro

Sincere and vulnerable, clear eyed and tough, the familiar themes of love, loss, and hard fought freedom that Beggs so convincingly explores, have reached a new level this time out. On Blue Bones, the effortless grace and breezy delivery that has become her vocal trademark are supported by some of North America’s most respected roots musicians to make this the best sounding album of an already impressive career.

Kim Beggs hasn’t always made her living as a singer-songwriter, and as someone who began work at the tender age of twelve, the road has never been easy for her. Born in Val d’Or, Quebec and raised during her younger years in the mining towns of Northern Ontario, Kim inherited a worker’s hands and a sturdy disposition before leaving her Toronto home to arrive in the Yukon in the winter 0f 1991. With only fifty dollars in her pocket and a pawnshop guitar, Beggs spent more than a decade swinging a hammer, and working in the trades before she started performing away from the campfire and singing her own songs.

It’s often been said that all Canadian artists are influenced by geography, and even though the soul informing Kim Beggs’ music might sound Appalachian, it’s easy to hear how the expansiveness of the Yukon allows her creative imagination to roam. The west was settled long ago and Kim’s frontier heart needed somewhere to inhabit, merge with and make her own.

Like all of Kim Beggs’ music, the songs on Blue Bones authentically capture the rustic charm of the Canadian north, and allow people down south to experience the vicarious thrill of life in the outback from the comfort of their homes or a seat in a concert hall.

It’s not surprising that Kim has garnered a lot of praise and attention throughout her career. She represented the nation at Canada Day celebrations in London’s Trafalgar Square and, most recently, was a nominee in CBC Radio’s Songquest competition. ‘Streetcar Heart’ earned her a Canadian Folk Music Award, Western Canadian Music Award and Just Plain Folk (U.S.) award nominations along with a Porcupine Award for Find of the Year.

So, with all the attention garnered for her first two releases, there’s a lot riding on the release of Blue Bones. Thankfully, in working with Steve Dawson, Kim Beggs has found a collaborator capable of helping her bring her vision to its fullest fruition.

Dawson’s masterful string playing graces every song in the album, and it’s a thrill to hear his national steel, electric slide and weissenborn back up Begg’s increasingly heartfelt guitar playing. With sympathetic support from John Raham (drums), Keith Lowe (bass) and Chris Gestrin (keyboards) the sound of Blue Bones is as deep, rich and organic as the place the music comes from. By adding vocal harmonies from Laurie Lewis, Gurf Morlix, Natalie Edelson and Jeanne Tolmie, Beggs and Dawson achieve a high lonesome sound with a distinctively Canadian feel, making Blue Bones sound like a lost Hazel Dickens album with a bright northern heart. On track after track, the players warm to the themes posed by Beggs’ music to give added resonance and depth to her already powerful vocals and lyrics that explore the intersections of darkness and light.

Blue Bones features nine original tracks as well as four well chosen cover songs. Beggs offers a stunning version of the old traditional, ‘ I’m Thinking of My Blue Eyes’ that will melt the most cynical of hearts as well as interpretations of classics from Bob Dylan, Patty Griffin, and Jack Clement that are sung in such a way that they sound as if she wrote them herself.

Kim Beggs is an original talent who makes music that transcends style and fashion. Without so much as a backward glance at what others consider ‘hip’, she instead makes music that is true. Bold, brilliant, dark and sincere, Blue Bones is destined to become one of the most memorable roots releases of 2010.