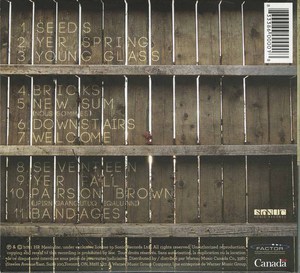 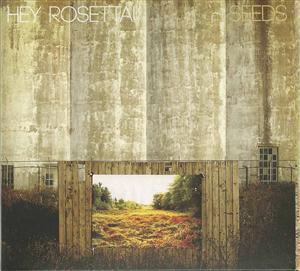 If you're like me, when you listened to Hey Rosetta!'s 2008 Polaris Music Prize short listed Into Your Lungs (And Around In Your Heart And On Through Your Blood), you thought it was great, but felt something was missing. Lungs itself was an improvement on the band's previous work, but it seemed like just when Hey Rosetta! were gearing up to rock out, they pulled back into cutesy pop territory.

That's why it's so great to hear the difference nearly three years has made on their third album Seeds. While the opening title track's folky guitar and string arrangements definitely recall some of the best moments on Lungs, there's also something new about the track.

Singer Tim Baker's voice is much stronger, and seems to be brimming with confidence. At times, he's almost yelling out the words, and there's no way you'll get through the track without thinking he believes everything he's singing.

There's definitely more of a robust feel throughout all of Seeds. First single "Welcome" is probably the heaviest (for Hey Rosetta!, at least) thing the band have put to down to date, and "Yer Spring" has a similar feel.

But it's on the former track where you realize how much Hey Rosetta! have grown as a band. It'll be a true favourite at live gigs, and within 10 years will have its place firmly entrenched in the Canadian rock canon.

The band try new things on "Bricks," which has an arpeggio and slide guitar riff that strangely make it sound like Radiohead's "Weird Fishes/Arpeggi."

Seeds succeeds in ways Lungs — though a good album — did not. On this one, Hey Rosetta! prove they're a band who've found
their voice.
-Alex Hudson

Hey Rosetta! have always had a flair for the dramatic, and the Newfoundland six-piece sound as epic as ever on third LP Seeds. The group recruited additional string players for the recording sessions, layering these contributions repeatedly to create a faux-orchestra. The lush strings give extra heft to the group's cinematic folk rock songs, which contain everything from skanking reggae grooves ("New Sum") to Inuit throat singing ("Parson Brown") to booty-shaking, Afro-rock breakdowns ("Yer Spring"). On the cinematic "Yer Fall," the band follow Arcade Fire's baroque rock blueprint, and the sweeping, group-sung crescendo sounds distinctly similar to "Wake Up." The intricate arrangements are impressive, but the band sound best when they strip things down. Closing track "Bandages" is a gorgeous palate cleanser, relying on little more than strummed acoustic guitar and some sparse accompaniment to convey frontman Tim Baker's heartbreaking message: "The nothing weighs a fucking ton." For Hey Rosetta!, bigger isn't always better.
-Sonic