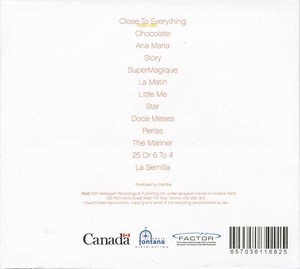 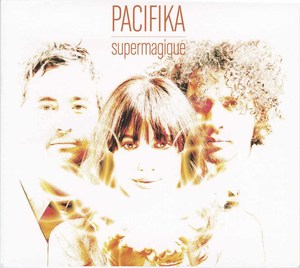 Available to Canadian customers only:

Pacifika, the Canadian group (whose name means “peaceful”, and with the “k” substituted for the usual “c” in the spelling communicates “peaceful with an edge”) is delivering new music of a high order – global and ethereal via a delicious mix of Latin rhythms with a multilingual approach of English, Spanish and French lyrics. Their first album, ‘Asuncion’, received rave reviews and as good as it was, their new work released in August 2010 is leaps and bounds above their earlier release.

In fact, The iTunes USA store has named ‘SuperMagique’ the best World Music Album of 2010.

Let’s get something out of the way. The group’s singer, Silvana Kane, is the feature attraction both for her beauty and the stylized eroticism of her supermagical voice. Youtube videos and presskit photos of the group may appear consciously designed to seduce the viewer and there are those in the media who have not been comfortable with that. However, there is nothing in either the videos or the photos that is unduly provocative. Silvana would be memorable even if she were wearing a parka and a toque. She simply matches the beauty of the group’s music. We don’t see any hint of exploitation in the marketing of the group’s image.

The new album ‘Supermagique’ is a polished and sophisticated outing that grows on the listener with every hearing. The guitar playing, with its flamenco and classical influences, is exceptional. The percussion work, supported by some great bass-playing, supplies a bottom end that is all the more appreciated on a great music system. The production values on this album are superb. Last but not least, this is an incredibly joyful work that with Silvana’s heavenly vocals seems to have been conceived and executed on the dawn of a new and exciting day. It may change your view of the world – and convince you that life is a thrilling and magical adventure. The music is intoxicating as well as being an intriguing mix of Brazilian, Spanish and unclassifiable textures wedded to strong production values; some might consider their music as a form of electronica, but if so it is electronica with a deeply personal touch.

The standout track is their inventive cover of the old Chicago tune ’25 or 6 to 4′. There are two kinds of covers – one being a replication of the existing work, and the second being a reimagining, a re-invention that brings to mind both a deeper understanding of the original, and a celebration of the cover artist’s powers of persuasion. With Pacifika we are talking the latter case.

In addition, we highly recommend the following tracks for their sheer beauty of production and their flawless execution: the title track ‘Supermagique’ with its great groove and hypnotic vocal, and ‘Little Me’ with its gorgeous acoustic overlaid with a dreamy vocal. This latter tune is a wonderful song about the unimportance of man in a vast but undeniably beautiful universe. ‘Doce Meses’ is also a great track, with a superb Youtube video.

Silvana got her start a few years ago in the Vancouver-based band West End Girls. They had a few minor hits and Silvana decided to stretch her wings by experimenting with Latin and world rhythms. She is Peruvian by birth, and cosmopolitan in her musical influences. Backed by the classically-trained guitarist Adam Popowitz and the versatiled bassist Toby Peter, the group gained early notice in 2008 both on iTunes and National Public Radio. Now managed by the noted Los Angeles artists’ management company Union Entertainment Group, Pacifika is rapidly gaining international attention.
http://vivoscene.com/feature/pacifika-supermagique/