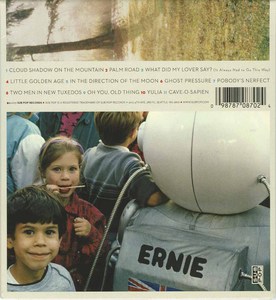 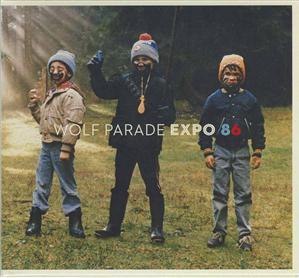 Are Wolf Parade a supergroup? Google seems to think so: It returns some 70,000 results on the matter, including several from this very website. Certainly their lineup is stacked enough for the distinction. Between Spencer Krug, Dan Boeckner, and Dante DeCaro, I count half-a-dozen notable bands past or present, and drummer Arlen Thompson has put in work with Arcade Fire. But supergroups are rarely this prolific, nor this devoid of ego, and Wolf Parade have excelled at reconciling two increasingly distinct songwriting presences to make their music with-- rather than on top of-- each other.

This is especially true of Expo 86, the third Wolf Parade record in just under five years. Co-leaders Dan Boeckner and Spencer Krug are both coming off of arguably their most successful self-led projects yet. Last year's Dragonslayer served as a culmination of sorts for Krug's Sunset Rubdown, and Boeckner's Handsome Furs made a huge leap from curios to contenders on 2009's Face Control. Both seem to have carried the strengths of their respective sorta-side projects into the booth for Expo 86. While Wolf Parade's self-produced 2008 LP At Mount Zoomer was a notoriously laborious record to make, Expo 86 is said to have come together quickly, with help on the boards from Howard Bilerman. Limber and focused, it sounds like a record made by a band without a bunch of other commitments, and more than the two Wolf Parade records that preceded it, like a unified statement from its two songwriters rather than a couple of strong voices working in parallel.

Krug takes Expo's first shot with the chatty "Cloud Shadow on the Mountain", a jumpy, almost paranoiac ramble that that feels closest to the scattershot bluster of his work on At Mount Zoomer. Boeckner's "Palm Road" follows, a fairly standard Springsteenian rattler that gets it done but fails to ignite. Each track is distinctly the work of its author, but it's at this point that the differences between the two songwriters start to blur. "What Did My Lover Say? (It Always Had to Go This Way)" is Krug's, but it rides a rawboned riff that feels far more like the work of Boeckner, with Krug keeping the flights of lyrical and vocal fancy to a minimum. Here, especially in the wake of Zoomer, Krug's songs feel very to the point, as though he's saving the weird stuff for the Rubdown records and just wants the Wolf Parade tunes to pop. Which they do. And while I rather like Krug in the streamlined mode he's in here, one could easily argue he loses something having his edges sanded down like this.

While Boeckner's contributions to the Wolf Parade catalog have been by turns dizzying and drab, Face Control established him as a force of casual cool, and he brings that vibe to everything he touches here. Whereas Krug seemed to dominate Wolf Parade's 2005 debut, Apologies to the Queen Mary-- despite a strong showing from Boeckner in that record's back end-- the balance seems to have shifted some, and Boeckner's contributions here are uniformly strong. His circuitous songs are by and large more memorable than Krug's, but even at his best-- "Little Golden Age," "Yulia"-- he never quite blows it out like he did again and again on Face Control.

Expo 86, if nothing else, feels like the realization of a Wolf Parade sound; the exquisite Apologies carried the long shadow of its producer Isaac Brock, and Mount Zoomer felt too often like two personalities careening off each other rather than finding some common ground. Solid and occasionally striking through it is, I do come away from Expo 86 feeling a bit unsatisfied. Apologies was such an exhaustingly cathartic listen, Mount Zoomer was a puzzle you had to put together, but Expo just kind of lays it all out there, and the takeaway just isn't what it was for its predecessors. It's quite a feat to get these two singular songwriters, both riding waves of creativity, to cohere in this way. But after the individual successes of Face Control and Dragonslayer, Expo 86 finds a nice comfortable spot somewhere in the middle, which feels more dependable than revelatory. Could be a little more supergroup-standard ego would do them some good.