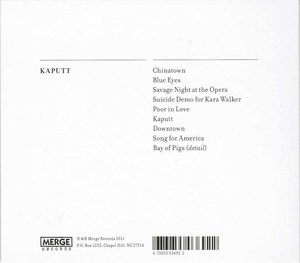 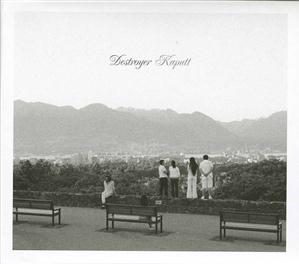 Every era has a sound. When considering this, it can be easy to forget that the sound developed as a way to express something. Music heard as kitsch years later was once put forth with complete sincerity. I mention this in connection with Kaputt, the new record from Dan Bejar's Destroyer, because the first thing that strikes you about the album is its unusual sound, one for which we've all developed a cluster of associations. The production and arrangements evoke a narrow window of time-- sometime between, say, 1977 and 1984, or between Chuck Mangione's "Feels So Good" and Sade's Diamond Life with stops along the way for Roxy Music's Avalon and Steely Dan's Gaucho. It slides between soft rock, smooth jazz, and new romantic pop. The bass is fretless; the synths have the blocky contrast of a Nagel painting; there are heavily reverbed trumpets and saxophones that almost serve as a Greek chorus, trilling away at the end of every line to enforce the beautiful plasticity of these songs. For Destroyer, this sound is new, and it's there for a reason.

The sound casts Bejar's songs in a very particular light, and reinforces the feeling of the singer as persona. Bejar has always come across this way to varying degrees, sure, and his albums all have their own unique feel-- the rootsy art-pop of Destroyer's Rubies, the MIDI experiments of Your Blues, and so on. But here the persona seems even more sharply defined. Singing these songs, Bejar comes over as the wizened ex-playboy; he's indulged every vice, come through the other side, and now looks on amused. The cover of Leonard Cohen's Death of a Ladies' Man, a record that seems to serve as a spiritual (though not sonic) father to this one, shows this figure in its quintessential form. On that sleeve, we see a man in sharp but slightly disheveled dress, a cigarette dangling from a couple of fingers; beautiful people are seated at the nightclub table, ready for another night of glamor and pleasure.

Leonard Cohen in that image has a sense of swagger, and you want to pull up a chair, have a drink, and hear him hold forth on the topic of his choice. The figure inside the songs of Kaputt understands the allure of this life while understanding equally its futility. On early listens, a couple of lines from the title track jump out and seem to serve as a thesis for the record as a whole. "Wasting your days chasing some girls, alright/ Chasing cocaine through the backrooms of the world all night," Bejar sings, as horns twist around in a bath of reverb. He sounds bemused, but not necessarily judgmental, holding two feelings in mind at once: our reflex to indulge ourselves, and the knowledge that it's killing us.

But this happens on just one level, which is what makes Kaputt so fantastic. It goes as deep as you want to go. People can miss that Dan Bejar is funny as hell-- he seeds his music with lyrical and musical in-jokes, and everyone has their own favorite lines to pluck out of his songs and admire for their concise wit. He likes surprises-- few lyric sheets have as many exclamation points. But the essential quality of all his records is complexity. They are doing a lot of things at once. Kaputt feels rich.

For one, there is the surface beauty of the sound. Some less inclined to the pleasures of the music from the aforementioned era might have an initial reaction to its essential corniness, but once you've tuned in, it sounds beautiful. The songs seem delicate and glassy and shimmering, and Bejar has toned down his quirky voice and sounds relaxed and focused. So it's easy to enjoy bumping the wet, jazzy pop of "Chinatown", which suggests the rainy streets of an old city and new dramas unfolding around every corner. Or wallow in the simple and elegant hook of "Blue Eyes", the way Bejar voice works next to Vancouver singer Sibel Thrasher, a regular vocal presence on Kaputt who sort of serves as the Nicolette Larson to Bejar's Neil Young. But "Blue Eyes" also has sly lyrical references ("your first love's new order," "Mother Nature's Son") and funny put-downs ("I sent a message in a bottle to the press/ It said, 'Don't be ashamed or disgusted with yourselves'"). More than any other Destroyer record, you can just throw this on and it sounds good, and plenty will do well stopping there. But for those so inclined, there's more to explore.

So the lite-jazz style can seem a little funny, but it can also be sad and sexy and joyous. And the writing is dense with references-- to other songs on the album, songs by other bands, to the music business, art outside the sphere of music. "Suicide Demo for Kara Walker" is the most striking example. It's a collaboration with the artist Kara Walker, whose work, among other things, probes the racial history of America. Bejar adapted the words she provided for him on cue cards, and the result is fragmented and dream-like, taking the Destroyer project to a new place. "Wise, old, black and dead in the snow: My Southern sister..." isn't the sort of thing we've heard from him before. An early demo of the song reminded Bejar of the band Suicide, hence the title. That's how things work in his world. Laughs are mixed with grim insights.

Two tracks stick out a bit here. The astonishing "Bay of Pigs", released as a single in 2009, concludes the CD version of this album, and it's the one song that feels out of place. It's longer, proggy, uses different textures, and ultimately seems to be here because it's an amazing song and as many people as possible need to hear it. Fair enough. And the vinyl version of Kaputt also has a side-long, 20-minute ambient track with just a bit of voice called "The Laziest River", which is enjoyable and immersive but not essential. Both indulgences are easily forgivable.

Bands can be brands or concepts that can be summed up in a line or two-- which is the power of brands. It's a good thing in proper doses. But Bejar's essential complexity ultimately feels human. It seems absurd to look for genuine wisdom in music in 2011, when we're constantly gorging ourselves on the all-you-can-eat buffet of post-modern web culture. But Kaputt feels wise. Like a mirror that actually points back at something better. Something you can jam and let wash over you, but also something you can use. It feels funny, tragic, artful, and ultimately true.