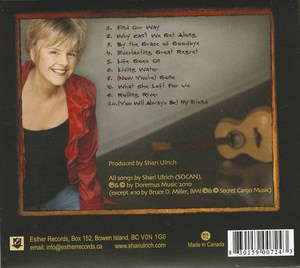 The multi talented singer, songwriter and instrumentalist is now joined on her solo shows by her 19 year old daughter Julia on violin, piano, guitar and vocals along with partner and Jazz great Bill Runge. She continues to tour and record with the Pied Pumkin, Ulrich Henderson Forbes, and recently with Barney Bentall and Tom Taylor. She also composes for film and television and produces the Vancouver Bluebird North concert series for the Songwriters Association of Canada.

In August of 2007, Juno-winning recording artist Shari Ulrich spontaneously signed up for one of those web sites that helps reunite adopted children with their birth parents. Within 48 hours, she was talking on the phone with the son she had handed over at the unwed mother’s home 39 years earlier. She had been barely 16 at the time. The joyful reunion is chronicled on “By the Grace of Goodbye,” one of the highlights of Ulrich’s new CD, Find Our Way—her seventh solo album and her first ever fully self-produced project. Best of all, the May 7th CD release concert at the Rogue Folk Club will see the whole family perform together for the first time—including son Mike Magee, who, it turns out, plays percussion.

A member of the B.C. Entertainment Hall of Fame, Ulrich has absolutely nothing to prove as a singer, musician or composer, so to say that Find Our Way maintains the consistency of her previous recordings is a compliment of the highest order. That she achieves this having taken control of the production for the first time is a toast to both her skill and—she says—to the influence of the producers she worked wit along the way.

Ulrich, who has always been exceptionally generous about sharing her personal joys and sorrows with her fans—whether in her lyrics, on her web blog, or in her public advocacy for survivors of assault—offers more glimpses into life and family on Find Our Way, sharing thoughts and stories that countless others will be able to relate to. “(Now You’re) Gone” is inspired by her daughter Julia’s leaving home to go to university. “Life Goes On” and “Everlasting Great Regret” are reflections on life’s unexpected turns. “What She Left for Us” is a tribute to her late mother. Then, of course, there’s “By the Grace of Goodbye,” a moving number that avoids both sentimentality and melodrama while tackling a subject that has been surprisingly under-sung-about.

The arrangements on Find Our Way are a true family affair, with violin parts performed by Ulrich’s daughter, Julia Graff, and piano and bass lines provided by her partner, jazz legend Bill Runge. Ulrich herself plays guitar, mandolin, fiddle, piano, cello and accordion. Additional contributions come from friends Barney Bentall (harmonica), Karen Savoca (percussion) and David Celia (guitars), among others. The classic roots instrumentation provides a tasteful backdrop for Ulrich’s voice, which is every bit as pure and expressive as it was in the 70s, when, as a member of Valdy’s Hometown Band, she first won audiences over with her rendition of Joe Mock’s “Flying.”

Transplanted from San Rafael, California during the height of the flower child era, Ulrich made a name for herself in Canada as a member of the seminal West Coast folk outfit, Pied Pumkin. Her breakthrough came when she joined the Hometown Band, with whom she won a Juno for Most Promising Group. She went on to release two solo albums with A&M Records and one with MCA, earning a second Juno—for Most Promising Female Vocalist of the Year—and two subsequent nominations for Best Female Vocalist. When the majors released her from her contract in the wake of corporate mergers, Ulrich began recording as an independent artist, while also pursuing a wealth of other projects. She produced segments for Sesame Street, wrote and hosted CTV’s Inside Trax, co-hosted Futurescan with David Suzuki and composed for film and television. Ulrich has recorded three independent albums and released a Best Of compilation. She is also a member of the folk supergroup UHF, along with Bill Henderson and Roy Forbes. Most recently, she has been recording and touring with Barney Bentall and She Stole My Beer’s Tom Taylor.