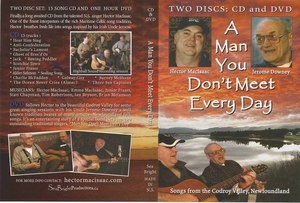 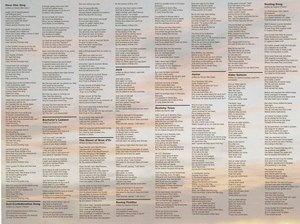 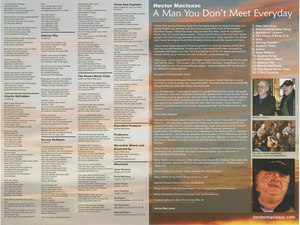 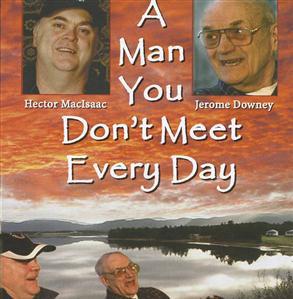 A Man You Don't Meet Everyday

There are very few in Cape Breton who would recognize the name Jerome Downey, a singer from the Codroy Valley in Newfoundland. There may be a few who would be familiar with Hector MacIsaac, an Antigonish area lawyer and singer who is Jerome's nephew. For years I've maintained that Hector is one of the finest folk singers that I know and, because of a recent recording and video, I can say the same about Jerome as well.

Noted Scottish historian and musicologist Margaret Bennett is a frequent visitor to Cape Breton and is well versed on the music of the Codroy Valley. Her book, The Last Stronghold, is the story of the Gaelic music among the Inverness County settlers in that area. Bennett describes Downey as being "like a newspaper" as he sang the songs that told the stories of the day from his part of the world. As such, he reminds me of the late Joe Neil MacNeil, someone who absorbed the music and the stories of their time and became a repository of local information.

A Man You Don't Meet Every Day was a project of passion by Hector MacIsaac, an opportunity to expose the music and stories of Jerome Downey to one and all. It consists of an hour-long DVD, documenting three visits by Hector to an ailing Jerome Downey, the songs sung by the pair, the history of the songs and the songwriters. Also included is a 15-cut CD by Hector containing full-length versions of many of these songs, along with several of his own compositions.

Jerome is well on in years and suffers from Alzheimer's. While he often was reluctant to talk, he was never shy about singing. From him poured forth traditional ballads, many obscure and rarely heard, as well as songs written by contemporaries such as Hughie O'Quinn, Paul E. Hall and James Downey, all with a voice still clear and substantial, well used to performing before a waiting audience. All this music is tastefully surrounded by commentary from Margaret Bennett, members of Jerome's family and Hector himself.
Collectively, this is a combination of music and history mixed in interesting proportions. A great addition for any collector, it will likely be difficult to find locally, but it would be worth the time and effort to track it down. After all, Jerome Downey and Hector MacIsaac are men you don't meet every day.
-Cape Breton Post

It isn’t often you see two men entirely comfortable and enjoying singing together. But that’s what you find in this wonderful new documentary from Seabright Productions featuring Nova Scotian folksinger Hector MacIsaac and his Newfoundland uncle Jerome Downey. Filmed both at a concert in Antigonish and at his home in the Codroy Valley of Newfoundland, A Man You Don’t Meet Every Day explores the rich musical tradition of this part of the province’s west coast.

Actually, it is more than a DVD; the set includes a CD of music featuring Hector MacIsaac, his daughter Emma (19) and friends Junior Fraser, Stan Chapman, Tim Robertson, Ian Bryson and Brian Melanson. The music is pure East Coast folk, storytelling in song about the people of Newfoundland’s Codroy Valley. Hector MacIsaac has a look of the late Stan Rogers about him when he plays on stage and his deep voice reminds me of the great Canadian folk musician. When Emma’s pure voice joins his, the effect is spine tingling.

It was never, says MacIsaac, in the grand plan to make the CD a commercial success. “I started doing the CD because I wanted a recording of myself and my daughter… She has a very eclectic taste in music, but these (the songs on the CD) are the songs she and I sang together since she was 12 or 13.”

The CD comes on the heels of a couple of sold out concerts in the auditorium at St. Francis Xavier University in Antigonish. “Sold out was quite a surprise,” he says. “Nobody sells that place out. It holds 610 seats!”

When I spoke with Hector MacIsaac about this project, he explained that the DVD is “I guess a documentary on the oral folk music tradition. It tells the story of Jerome and his music and the music of the Codroy Valley.” He illustrated that statement with a song called “Just Going Over to Sandy’s”, a tune written by a piper from Cape Breton some time in the 1930s. “The first verse had been kicking around for years, but he (Jerome) added a few of his own.” The song remains one of MacIsaac’s favourites.

“He never collected anything except in his head,” he added. “Jerome sang everything. He was as apt to break out in the New Christie Minstrels as songs of days gone by, but it was folk music he was pretty much interested in.

“He could sing for ten hours and never repeat a song. As I kid I listened to pre-recorded music. But his songs were unique because they were homegrown. His music comes right out of the soil.”

He credits Peter Murphy of Seabright Productions with the success of the DVD and his brother Dan MacIsaac with getting the project of the ground. Dan ran into Peter Murphy at a hockey tournament in Port aux Basque and invited Murphy to Jerome’s home for a music session.

“The odd thing looking back, adds Hector, is that I was never conscious of it happening t me. I hung around with Jerome and he with me because we loved to sing together. I never viewed my part as being of any importance at all. I was just singing.”

The DVD combines still photographs of family members, interviews with friends and family, and lots and lots of songs. One scene will involve MacIsaac and Downey singing together at home and is often followed by MacIsaac talking about and demonstrating the song in concert in Antigonish. They are songs of the everyday events and people of the Codroy — songs of scoundrels and rascals and lovers and scolders. Usually there is a humorous double meaning to a song, such as “Alder Salmon”, written by Jerome’s brother James Downey. It’s a tale of salmon poaching, with the singer telling the poacher “Take him down the river to an Alder patch/Tuck him away until you can come back”.

Many songs were written by Codroy composers Hughie O’Quinn, Mickey J. McNeil and Paul E. Hall. They are the descendants of those migrants who arrived in the Valley from Nova Scotia over 150 years ago.

For Dr. Bennett, these songs are important. Had they not been written, had they not been sung by Jerome Downey, an important part of the social history of the Codroy Valley would have been lost forever. They are unusual songs, she adds, that in her years of song collecting in Newfoundland she has not heard before. In her eyes, he is a social historian. “It’s important stuff,” she comments in the DVD.

The songs remind one of Newfoundland before Confederation in 1949. As Hector MacIsaac explains it, the Valley, settled by Scots from Inverness who were drawn there because there were no property taxes, were just about unanimous in not only voting against Confederation with Canada but to this day believe that the Premier, Joey Smallwood, somehow rigged the vote. But the songs also remind the listener of the tough conditions in Newfoundland’s out ports, such as one on sealing in March. Seals were an essential part of the diet in the spring when, after a long winter, the pork barrel was nearly empty and the people faced hunger.

Paul E. Hall’s “Bachelor Lament” takes a different approach. It talks of him polishing his stove in the hopes of impressing a possible bride. But in fact, the stove was “polished” by a group of friends, sitting around it, drinking and chewing tobacco and then spitting tobacco juice onto the stove. When Dr. Bennett first heard the song, she was seated in a car chair held up on blocks in Paul E. Hall’s tiny cabin in the woods. The walls were covered in more than 30 calendars, each featuring the Pope. And above the stove, hanging to dry, were his songs and mittens. “He was quite eccentric,” she says. “But it was wonderful.”

While most of the songs are probably Newfoundland in origin, some she suspects came with Irish settlers. For example, Dr. Bennett found “MacFaddyn’s Waltz” in an Australian collection of folk songs. How, she wonders, did Jerome Downey come across that song?
This DVD is enjoyable on so many different levels. There is the starkly beautiful footage of the Codroy Valley where horses roam freely across roads. There are the stories behind the songs that Hector MacIsaac and other commentators reveal. And then there is the spontaneous joyfulness of listening to Jerome Downey and Hector MacIsaac sing together. In the liner notes, MacIsaac seems to regret not having recorded these songs earlier, when Downey was in full voice. (Jerome Downey, aged around 85, has been diagnosed with Alzheimer’s Disease.) But there is nothing to be sorry about. Here are two men, delighting in being in each other’s company, singing an incredible range of songs, and keeping alive the traditions of a little piece of Newfoundland.

MacIsaac perhaps best sums up his uncle when he says, “Jerome sings for joy. He epitomizes joy and that is what folk music is about — what all music is about.”
Margaret Bennett plans another DVD on Jerome Downey, says Hector, “probably because she’s sick of looking at me.” He himself as another project on the go: a CD on the Black Donnelleys, It will be a story in song of a conversation between William Donnelly (killed in 1897 by vigilantes) and his dead mother. “At the moment I’m just feeling my way along.”

Hector MacIsaac is a rising folk singer and if you can get hold of this CD/DVD set, do so.
www.celticlife.ca