MacIsaac, Hector - The Legend of the Black Donnelly's 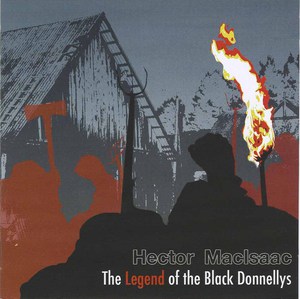 The Legend of the Black Donnelly's

Amidst the potato famine of the 1840’s, Jim and Johannah Donnelly, with at least one son, emigrated from Tipperary, Ireland to what they hoped would be a New World, free from Religious strife and foreign landlords. They passed through the infamous quarantine camps of Grosse Isle off the coast of what would one day become known as the Province of Quebec. They made the inland trek and settled outside the Village of Lucan, Biddulph Township, northwest of London, Ontario. Like many penniless Irish peasants, they squatted on land owned by the Canada Land Company but, unfortunately in the Donnellys case, leased to one John Grace.

By 1857, Jim and Johannah were blessed with seven sons and a daughter, but trouble found them when John Grace re-appeared. Grace would sell part of the land to Donnelly but the remaining southern portion was sold to a third party. These southern parcels of lands ended up in the hands of Patrick Farrell, who tried to eject the Donnelly family. After a bitter court battle, Jim Donnelly killed Farrell at a logging bee. Tried and convicted for murder Jim Donnelly was sentenced to hang, but the sentence was later commuted to seven years in prison. It was to be the catalyst that would eventually embroil the non-conformist Roman Catholic Donnellys in a transplanted “Auld Country” feud with their Roman Catholic brethren.

During the seven years that Jim spent in prison, Biddulph Township, and Lucan Village in particular, became known as being far wilder than any American Western cow town. Its murder and violent crime rate far exceeded any of its southern cousins. While in prison, and after his return home his seven sons gained a checkered reputation as fighters and petty criminals. Though not entirely free from blame, the Donnelly sons were not the only perpetrators of crime in Biddulph Township. History will record that though killings occurred, none were perpetrated by the Donnelly men, save that of Patrick Farrell. They were often made the scapegoat for many crimes that occurred, and they too fell victim to many crimes at the hands of their neighbors.

The Donnelly family was guilty of three cardinal sins: they were good looking; they were hard working; and they were successful. No greater faults could serve to incite more completely the jealousy and hatred of denizens of a small town. Those sins coupled with a willingness to fight and stand their ground did little to endear the Donnellys to the law.

With the arrival of the landless itinerant farm laborer, James Carroll, in mid 1878 and a new Parish Priest, Father John Connolly, in January 1879, the final ingredients for massacre were assembled. A Vigilance Committee had already been in existence, in an attempt to deal with the general lawlessness. The Priest formed a Peace Society comprised of the same Vigilantes. Who indeed was an easier target than the admittedly wild, non-conformist and Protestant-friendly Donnelly clan?

The fifth eldest son, Michael, was stabbed to death by a Vigilante on December 9th, 1879. Five of the remaining Donnellys were ultimately massacred by a band of Vigilantes during the night of February 4, 1880. One of the surviving sons, “the unspoken leader of the family”, William, vowed that justice would one day be done.