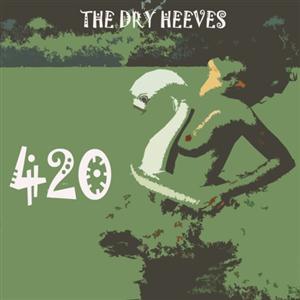 The Dry Heeves' album may be the most diverse, yet linear, album of all time. Or at least the most diverse album to come out of Meat Cove, Cape Breton. The album is 17 tracks of hard-ass dirt rock, piss and punch punk rock, and a few classic covers.

The Dry Heeves have managed to create a serious masterpiece of impressive music. The band is trying to make a strong social comment with 420....Song names like "Oxycontin," which is the source of a growing drug problem in Cape Breton, "F.T.W." (Fuck The World), which is mostly made up of incoherent cursing a pirate would admire, and "Son of a Gun," in which the band calls the Bush family a "killing machine," show that these experimentalists have something to say.

I don't think you have to be stoned to enjoy 420. Just be prepared to be blown away.
-Nick Khattar
Dalhousie Gazette (November 22, 2007)

I can tell by listening to this CD that the band has seen their fair share of garages and crowded bars. "Oh Candahar" is a brilliant, gritty song that exposes the ugly truth. This is obviously a band who are not afraid to say how they feel. The whole CD is full of great musicianship, tight playing, excellent vocals and strong lyrics. Anjali Heble provides memorable vocals on "Bras d'or bu". "Son Of A Gun" continues with the band's political awareness, and it does so with sincerity. "Reggie" is terribly original, and "Myspace Girl" is freakin' hilarious. There are many very good instrumentals on here as well. I love how this album never repeats itself. It is refreshingly varied and off the wall. Highly recommended.
-Gary Flanagan
Nightwaves (October 2007)