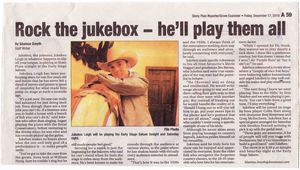 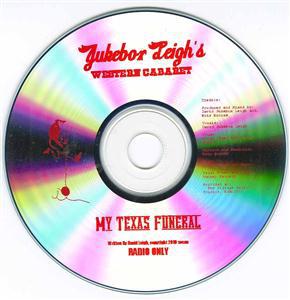 No holds barred Americana busting out of the gate about a poker game gone right for Jukebox Leigh, earning him the title of "Future KING of the Honkytonkers!!!" by Canadian Country Music Magazine's Bill Borgwardt!!!

About My Texas Funeral

"This future King of the Honkytonkers has succeeded in exhuming the FUN out of funeral."

David “Jukebox” Leigh has been performing for live audiences since he was 5 years old! “Jukebox” has wowed crowds as large as 5000 with his unique style of showmanship, energy, and pure musicality.

Raised by his parents in Edmonton Alberta, on Gershwin, Jolson, Mozart, Dixie, Church choir, and a solid musical education in Royal Conservatory, “Jukebox Leigh” has incredible versatility, which has taken him to distinguish himself in many musical genres.

After spending much time as composer and lead singer of the critically acclaimed experimental punk and metal band, “Hardy Drew & The Nancy Boys”, Jukebox wanted new opportunities to stretch and challenge him self musically. That lead him into the world of Country & Western, in his own words, Jukebox affirms, “Country music is wide open and even more open-minded than ever. With Country & Western, I can again sing about family, love, and personal vulnerability – things that we all can relate to.”

George Jones, Merle Haggard, and Hank Sr. evoke memories in a powerful and present way. It is with that unique sensibility, coupled with an ambitious crew of all-star musicians, that Jukebox releases his debut Americana single entitled, “My Texas Funeral” – a no holds barred 120k/ph tune worthy of old Hank Sr. or The Outlaws. With a definite sense of humor, this story of a poker game gone awry gives the listener a humorous peek into the wild lawless Old West and its favorite pass-time.

Jukebox Leigh was discovered by local Edmonton music magnate Zeno Ioannides, who gave Juke his debut shot at Edmonton’s prestigious Century Casino showroom opening for the legendary Dr. Hook. His performance was very well received and earned him an invitation back to open for Raul Malo of The Mavericks. Jukebox has performed at Metis Crossing Festival, and does volunteer singing for the adult mentally handicapped and in adult extended care facilities on a daily basis. You can catch him singing for The Eric Cormack Centre in their first annual benefit on September 25th and is one of this year’s special guest stars singing at the annual “Man In Motion” benefit concert for the Muscular Dystrophy Association, held November 7th.

Extra Special thanks to Alabama Nault for her patience, love and advice on every subject through every process, and for her sacrifices in the support of my music.
Also Caleb Lawrence for his engineering assistance in the studio during vocal tracking