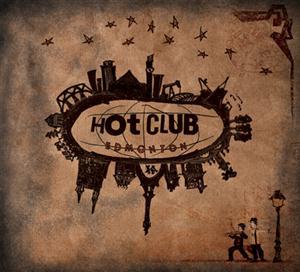 Gypsy Jazz with a twist. This new album is a fresh mix of french gypsy jazz and western canadian folk music. The album was named 2010's instrumental recording of the year at the WCMA's!

When you go to a band’s website and on the front page read “are you ready for a unique musical experience? This is a place where 1930’s Gypsy Jazz, meets Western Canadian Folk Music, creating a sound unlike any you've heard before: Hot Club Edmonton,” you tend to get rather curious about just what is going to be on the disk.

Well, true to its billing, Hot Club Edmonton throws together several musical influences on their self-titled effort. The idea of Parisian jazz certainly comes through, from the opening instrumental Belleville to the French vocals of Blanche which could have been playing in a French club during the Great War as far as style goes.

The CD liner notes explain the roots of Gypsy jazz. “Gypsy Jazz was shaped within the context of Paris in the 1930s’ by Django Reinhardt, Stephane Grappelli and the Quintette du Hot Club de France. Together these two masters popularized this style and made waves throughout the world. Gypsy Jazz is an utterly infectious genre of music that encompasses haunting airs, swinging melodies, driving rhythms and virtuosic improvisation. All of this is delivered with the Gypsy flair.”

That a band on the Canadian Prairies undertook this particular project is interesting and gratifying for the listener too. Hot Club Edmonton looks to capture that historical feel. “It is our goal with this project to capture the essence of the Quintette du Hot Club de France while paying tribute to two giants in the history of Jazz.”

To the group’s credit they do it well. Certainly the word infectious is one which comes to mind in terms of describing the music here. It is a fun disk to listen too. This is one worth checking out for its uniqueness, its upbeat music, and fine musicianship. Oh yes the best is Misty, with the sweet vocals of Thea Neumann. Impressive and beautiful.
Check this unique effort out at http://www.hotclubedmonton.com
-Calvin Daniels
(Review first appeared in Yorkton This Week newspaper May 12, 2010 - Yorkton, SK. Canada)