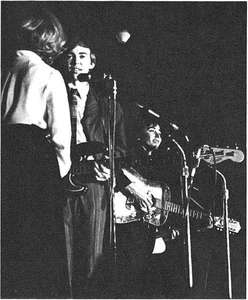 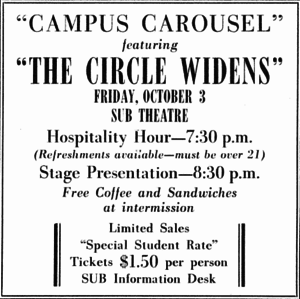 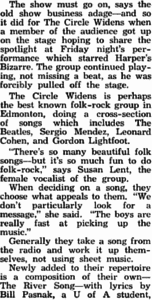 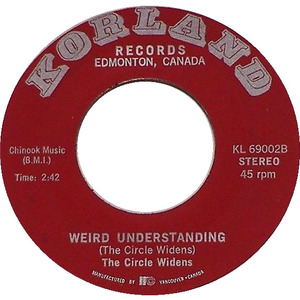 CAMPUS CAROUSAL: THE STORY OF THE CIRCLE WIDENS

The Circle Widens is but a footnote in Canadian music history these days; often only known by serious collectors or Edmonton residents of a certain vintage and location. In the late 1960's they were one of the top Folk-Rock groups in Edmonton, packing the house each and every night regardless of where they played. They'd perform a number of original songs, but were most famous for their covers from some of the day's most popular artists. Such as The Beatles, Sergio Mendez, Leonard Cohen, and Gordon Lightfoot.

The Circle Widens was originally formed by brother and sister folk duo Susan and John Lent; in the mid-1960's, under a different name. At the time, the two were still in high school. Upon beginning their education at the University of Alberta, they'd add their younger brother Harry Lent to the line-up in 1967. They'd quickly rebrand as "The Kinfolk" beginning to perform at a few events around the university. The group quickly garnered a reputation for their tight, high-quality performances. Unfortunately however, 1968 would see musical tastes begin to change with many of the youth. Susan put it like this "There is not really a good demand for folk-rock, but at University there is a fair amount of work." They usually play for youth groups, at university, in high schools and at Giuseppi's restaurant.

In March 1968, lead guitarist Greg Vetsch joined the band. He'd convince his cousin, drummer Wayne Vetsch to join the band that September. Shortly afterwards, they rebranded as "The Circle Widens."

The sound of The Circle Widens is comparable to that of fellow west coast folkies "Three's A Crowd," with the main difference being an emphasis on covers rather than originals. They also tended towards folk-rock rather than straight ahead folk. Female vocalist of the group, Susan Lent expressed her feelings on the matter in an old interview; "There are so many folk songs - but it's so much fun to do folk-rock." Clearly, they didn't want to be hampered by the old song book; not to say they didn't draw from it from time to time. When deciding on a song, they choose what appeals to them. Susan says "We don't particularly look for a message." She adds "The boys are really fast at picking up the music." They enjoy the challenge of adapting a song directly from the radio, learning it by ear and putting their own spin on it. Newly added to their repertoire is a composition of their own. "The River Song" was written by Bill Pasnak, a fellow University of Alberta student.

With their line-up fully assembled, the remainder of 1968 and 1969 would see the band begin to perform more frequently, building a loyal following around Edmonton at many high schools and universities. Bob Hunka, who worked on the University of Alberta Activities Board in 1968 began helping to manage the group; alongside John Lent.

It was through the Students' Union at U of A and Jerry Slavick that The Circle Widens were asked to perform with Harper's Bizarre. This was to be their biggest gig yet! "We were really excited about it. It was a real opportunity to be appearing with a professional group", said Susan. From here, the band's reputation could only go up. They had a change to briefly tour outside of Edmonton, appearing in Leduc, Red Deer, Saskatoon, and Blaine Lake, Saskatchewan.

The group had recorded an album's worth of material throughout the latter-half of 1969. They did a recording session at the U of A radio studios over the Christmas holidays as well as a few sessions for Coral Sound Studios in Edmonton that fall.

Only one single would be released from these sessions. "See About Dreamin'/Weird Understanding" was released on KORLAND Records, near the end of 1969, in limited quantities and had minor local success in Edmonton. The A-Side is written by Henry Lent, with the B-Side written by the whole band. It's unknown where exactly the songs were recorded. The publishing rights for the two songs are registered with Dick Damron's "Chinook Music" (BMI) and it was manufactured in Vancouver by Imperial Record Corp. Ltd.

The Circle Widens would break up in the spring of 1970 with some of the members leaving the business altogether. Near the end, A great guitar player called Brian Logan also played with the band, as well as a harp player named Al. The Lent brothers however, would go on to work briefly with the band "Red Wyng" (Laura Vinson's backing band) in 1977; writing 3 songs for their debut album.
They left behind them stories of their prominence in the late-60's Edmonton music scene, as well as their lone 45; an amazing dual sided original, featuring "See About Dreamin" a delicate acoustic ballad sung by Susan, backed by "A Weird Understanding," a fierce garage rocker sung by Henry.