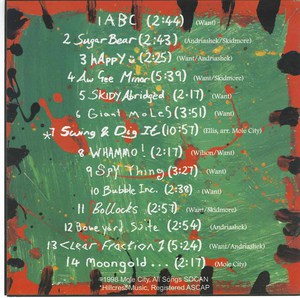 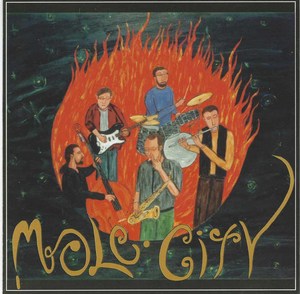 Their instrumental lineup might typically place them as a jazz band but in truth the five guys who make up Mole City are a little beyond all that. This is not to say they don't have an abiding respect for bebop and traditional jazz. But listen to the new self-titled debut disc from this two-year-old combo and you'll hear the influences of Ornette Coleman's loping groves, a little classical training behind the flute or piccolo lines, loose but tight Latin rhythms, and the salty sound of surfing guitar.

What else would you expect from a group who credit the soundtracks of Spiderman cartoons as an inspiration? The only really predictable part is that they approach their own original material with a genuinely fresh energy level, and a sense of good fun.

The group actually had it's origins about five years back when guitarist Chris Want, bassist/trumpeter Charles Andriashek and drummer John Wilson got together in another since-defunct project. They decided to advertise for other players in 1996 and that's how flautist Devon Rowe and sax/clarinet man Mark Skidmore came along.

Want says they put in a lot of rehearsals since then, especially leading up to the recording sessions for the CD last June. Most of the tunes had very set structures despite the loose feel of the disc, and he admits that having 14 tracks -- many under three minutes long -- is atypical for a jazz-oriented act.

"It was a conscious choice. A lot of the tunes are fairly simple as far as the chord progressions go and the rhythm section grooves. I find that if you drag them out too long it's just not as much fun as something short and snappy that makes you tap you feet before it moves on to something else. These tunes came out of many hours of jamming and it's fun watching something that starts out so rough turn into something that sounds pretty sweet."

The eclectic sound is a natural outgrowth of their varied backgrounds in the band, with members ranging in age from mid-20s to mid 30s. Rowe and Skidmore (both professional geologists) have had formal classical training, while the others are largely self-taught.

It's the rhythm section who discovered they had a mutual thrill in cartoon tunes, and Want is actually a computer programmer who started playing guitar in high school. "We're all big jazz fans," says Want but their musical influences take in a wide field and he admits it was more by chance than design that the Mole City sound absorbed elements of Ornette Coleman's marauding maters, or surf music for that matter.

So far the group's live gigs have been sporadic but fruitful, including Saturday afternoon slots at the Black Dog and a Momentum night at the Yardbird Suite. It's even more difficult now that Rowe's job has taken him to Calgary. In any case these musical moles are digging up exciting sounds.
-Roger Levesque, Special to the Journal, December 6, 1998